By Samantha Mahoney and Ola Stepien 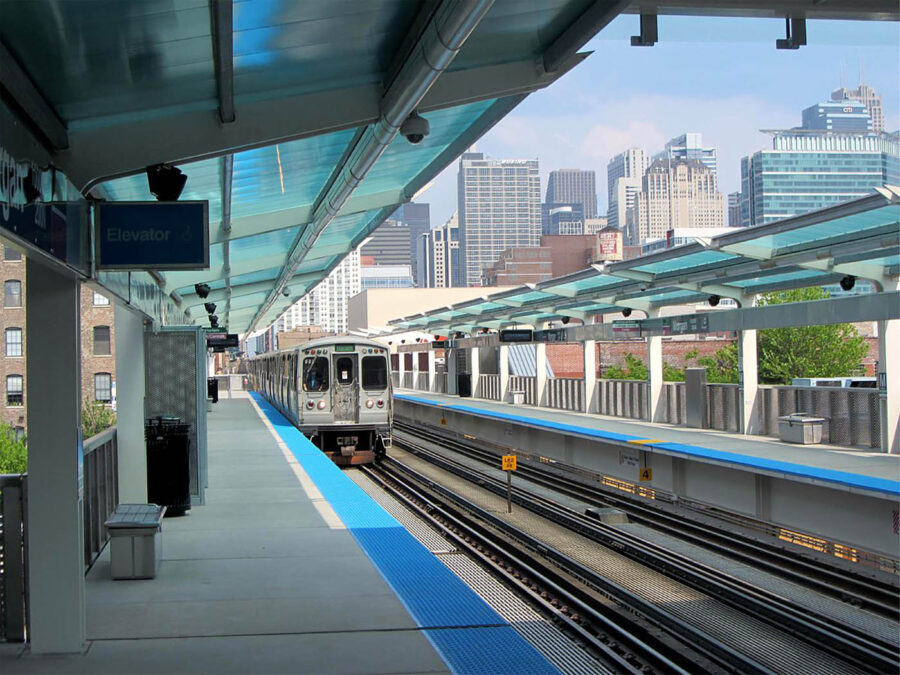 For Hugo Trevino, a Disability Services Specialist at UIC, riding CTA trains can be a challenge.

Trevino, who has been in a wheelchair his entire life, relies on the CTA to get around the city. And, as many Chicagoans know, not all public transportation is created equal, and the CTA is no exception. Trevino has faced struggles getting into the waiting area for the El trains through the elevator, and even pushing the elevator buttons can be difficult.

Trevino isn’t the only commuter that has experienced hardships on the CTA. According to the CTA, on an average weekday, 1.6 million rides are taken on the CTA. According to the City of Chicago, approximately 10.1% of the city’s total population reported having a disability. That would mean an estimated 161,600 people living with a disability ride the CTA.

Of Chicago’s 145 El train stations, 103 have elevators and are fully accessible. The other 42 have not been upgraded in decades, with some last renovated in the 1930s and a handful that have not been substantially improved since the late 1800s and early 1900s, according to CTA records.

Forty-two CTA rail stations are non-accessible to those with mobility disabilities. This interactive map shows all CTA stops with elevators and those without. There are future plans to renovate CTA stops over the next 20 years.

The impact of not having access to an elevator or the appropriate transportation to get to work, school, and other responsibilities. This is a privilege that is often taken for granted, experts say.

Shannon Moutinho, a Deaf and Hard of Hearing Services Specialist at UIC, said many people don’t take the deaf into consideration when riding the CTA. Her husband is deaf.

“Just the communication can be not great,” she said. “If you’re not able to hear the announcements, like my husband is deaf, and he has sat on a train that suddenly they make a verbal announcement like, ‘Hey everybody, this train is gonna go express,’ and so he’s not privy to that information.

“So some people get off the train because they don’t want to be on an express train, and he just sits there and all of a sudden, he’s on his way, all the way to Howard,” she said.

Trevino said the importance of having CTA staff present to help with difficulties such as individuals not being able to tap their Ventra card to get through the turnstiles or with issues regarding the elevators. Moutinho also highlights that CTA staff should be trained to assist individuals with disabilities and be able to communicate with all patrons.

“I don’t think it’s quite that bad with CTA because they are thinking about accessibility; they are working toward improving stations,” Moutinho said. “But again, I do think that it’s like it’s not as much a priority for people without disabilities.”

Imagine needing to leave for work and only having to check the arrival time for your bus or train. Needing access to elevators adds more time to your daily routine. And, if your designated stop didn’t update online and the elevator is out of order, you have no choice but to reap the consequences.

Both Trevino and Moutinho suggested having multiple elevators at El stops; Trevino said it would be easier for him mobility-wise. Moutinho said if one elevator went out of order, then there’s a second one right there on the spot.

“If your only option is to exit on one street instead of the other, that’s also an inconvenience,” Trevino said. “And I would love it if all train stations had two exit paths for people with disabilities instead of just one. You know, because I feel like that’s also a hazard.”

The physical constraints of these decade-old rail systems have threatened the infrastructure around these stops. To take on the project of updating these stops would be expansive to accommodate elevators and expensive in many cases.

When the Americans with Disabilities Act was passed in 1990, an estimated 10% of Chicago rail stations were meeting accessibility standards laid out in the legislation. Changes have been made to increase accessibility, the CTA president estimates that the El system is now 70% accessible 30 years after the disabilities act was passed.

One of the requirements the ADA has is that key stations must be accessible.

“Key stations probably mean the highest-trafficked stations, which usually are the destination stations; those are the stations downtown with lots of business happening,” Moutinho said. “Except the humans that work in those offices live in the rest of the city.”

She said that having these key stations accessible may be nice, but if you’re not able to enter the El to get to these stations, then it won’t matter in the long run.

Trevino said, “When you’re getting on a train now, the trains they’ve updated them to where the trains can kneel. So they lower a little bit which the buses do that toward the ramp, and that’s like what people can picture very easily, but I don’t know if people realize that like the trains also do that.”

However, this isn’t a perfected system on the El. Trevino recalled that sometimes the platforms and the trains do not correspond at the right height.

Recently, the new Infrastructure Bill got passed and will provide $1.75 billion in competitive grants over five years to state and local governments.

According to Kate Lowe, associate professor and director of undergraduate studies at the UIC College of Urban Planning and Public Affairs, the infrastructure bill will “fund things that are more material, like buses, and rail tracks and signals.”

“The CTA releases several plans on what it wants to do with funds,” she said. “The RTA is doing a strategic planning process right now; I don’t think we have all the answers on how all the dollars are going to be spent.”

In addition, the CTA has the All Stations Accessibility Program, which is working toward making the entire CTA system 100% accessible. The CTA did not respond to requests for an interview for this story.

Currently, the All Stations Accessibility Program is working alongside the Red-Purple Modernization Program. The CTA is currently working on the Lawrence, Argyle, Berwyn, and Bryn Mawr stations on the Red Line through this project, and is going to make these stations fully accessible, alongside fixing the tracks and other improvements the stations will undergo.

Following this, the Infrastructure Bill is going to provide public transportation $4 million out of the $1.75 billion.

It is important to note that the CTA does have in place a system of elevator statuses which you can check when you sign up to receive text or e-mail updates for elevators, as well as planned and unplanned service changes that affect bus or rail service on your route via CTA Updates.