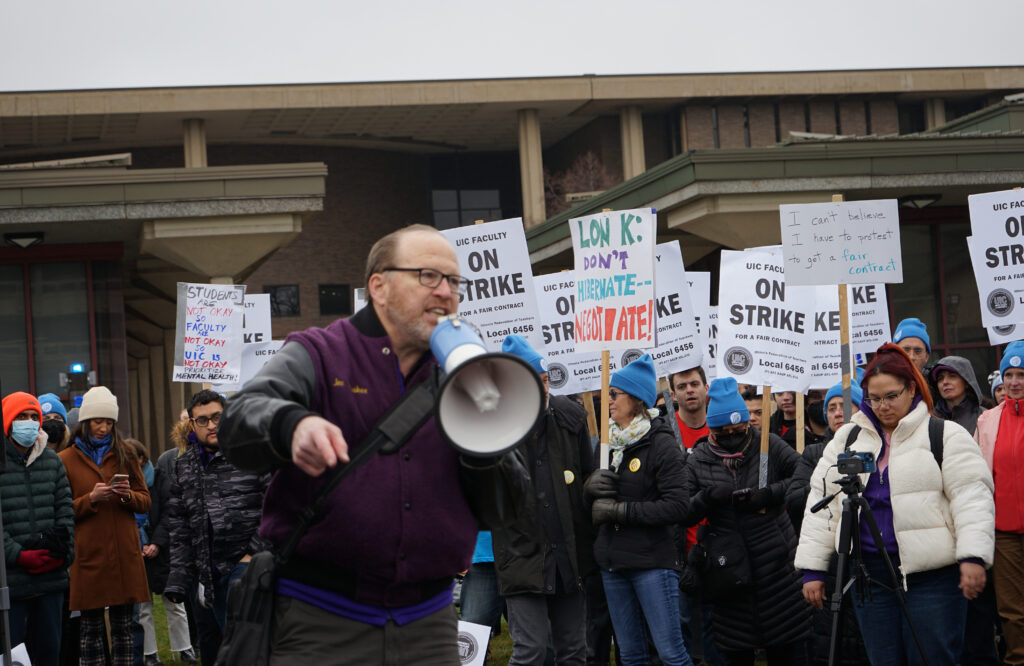 UIC faculty and supporters rally in the quad on campus on Thursday. (Photo/Lulu Anjanette)

News of UIC’s faculty strike that ended late Sunday night spread far and wide. Here’s a summary of social media coverage as well as messages from the union, faculty, students and others. This page will be updated frequently through the end of the strike. For full coverage, photos and multimedia, read this story.

Coverage of Final Day of Bargaining

BREAKING! We won! Strike suspended! Feel free to notify your students that classes will resume tomorrow (Monday). Much, much more information is forthcoming, as well as a membership meeting where you all will vote on whether or not to ratify this contract.
More info in email! pic.twitter.com/e7rY6wNwkJ

Key wins for @UICUF in this #faircontract are:
Non-contractual, public commitments on expanding resources for #studentwellness and establishing psychoeducational testing
Increased minimum salaries for the lowest paid faculty: $60,000 NTT and $71,500 TT (1)

Latest update an hour ago on instagram: "Mgmt. just isn’t serious enough yet. The counter they offered today is the same as they offered Friday, except for a .5% increase to salaries. They are not planning to offer us anything on progressive discipline." (2)

#UIC faculty and administrators are in talks again this afternoon. A @UICUF rep said they started today's session with some complications around non-economic issues (student mental health supports?): "We are working through these problems at this moment." #chicago #highered

Have gotten to interact with many great @UICUF colleagues in for a fair contract that secures better working & learning conditions. Many of those taking the most leadership don't have tenure. Have been thinking about and troubled by the stark divides in security/$ by tract (1)

BREAKING! Email from @UICUF bargaining committee: "Your turnout to the big bargaining session Monday and the pickets over the past four days have finally pushed management to get serious at the table. (1)

Just in from the @Suntimes:https://t.co/yoLle8ReHz

Our solidarity statement with striking @UICUF educators — now on the picket lines for four days in their fight for a contract that supports educators AND the students they serve:https://t.co/Wo4h8uIBRQ

I played bucket drums on the @UICUF picket lines again on Friday, so I don’t have any pictures. But I did walk 25k steps. I opted for a long bath while I listened to the bargaining session via Zoom. pic.twitter.com/ztn0MFZdiX

We send our support to @UICUF UIC United Faculty as you fight for a #FairContractNow & the working & learning conditions you and UIC students deserve. We stand with you in the fight for the future of public higher ed! Solidarity and hopefully warmer weather for your picket line! pic.twitter.com/YV70QA5ESG

“The administration owes it to our students and members to start bargaining in good faith. We urge Chancellor Reyes to do the right thing and settle this now…”- IFT Pres @DanJMontgomery @UICUF https://t.co/z6cmpBCnfr

A cold day but here's @johnston_ccctu from the mighty @CCCTU_Local1600 firing up the @UICUF picket line! One day longer! pic.twitter.com/1fF5ZLW008

A a señor selling cotton candy stands on the side while UIC faculty are on strike— picketing on campus.

Juan said he has been visiting the quad to sell cotton candy and ice cream (during the summer) for several years.

“They treat me nice,” he said in Spanish. pic.twitter.com/7Pgs26IKpJ

UIC Faculty strike for a third day as Wednesday negotiations for a contract agreement failed. pic.twitter.com/tOUnIUtHV8

Scenes from the @UICUF picket line, Day 3: The Rain Day. The January Chicago sky had threatened rain all week, but (even today) the rain has (mostly) held off. We got some sprinkles, but also a pep band. pic.twitter.com/tBeExJpPmI

As a parent of a CPS senior who received their admission notification from @thisisUIC last month, I urge Chancellor Reyes & the administration to do right by @UICUF and give them a fair and equitable contract that will benefit both faculty and students. We know UIC has the funds. https://t.co/sV1sEm2CvK

“It is outrageous that the dedicated educators in UIC United Faculty (UICUF) had to resort to a work stoppage once again. For nearly a year, they have been bargaining with UIC administration without success… https://t.co/WhnlTOfQSi

Get Up, Get Down, Chicago is a Union Town. @UICUF aren’t asking much:

Can't make it out to the picket lines to support @UICUF faculty on strike at @thisisUIC?

Write a letter to make clear your support and tell @thisisUIC to settle a fair contract now: https://t.co/ZlDFRBNQQk

UIC students face a third day of canceled classes as many instructors continue to strike.

Students standing in solidarity with faculty state they are "willing to stick it out with teachers and professors, however long it takes."https://t.co/ZjUkGpNpXR

Got word that @uicuf members and #UIC administrators did not reach an agreement during bargaining this afternoon. Guess we're looking at a third day of cancelled classes and picketing on Thursday. @thisisUIC #chicago #highered #education #Labor #strike pic.twitter.com/sC4E993SJi

University officials said the sides had agreed to resume bargaining Friday and could continue talks into the weekend to secure a new contract agreement.https://t.co/Rra7ysUIVG

Mayoral candidate Brandon Johnson speaking at the @UICUF strike rally: "For too long, we've had a political structure in this city that has made people believe, families, that they don't deserve better." pic.twitter.com/rTN4G8fheg

Faculty with @UICUF are picketing across the UIC campus this morning on Day 1 of their indefinite strike.