Brother of Uvalde Shooting Victim Struggling to Move on 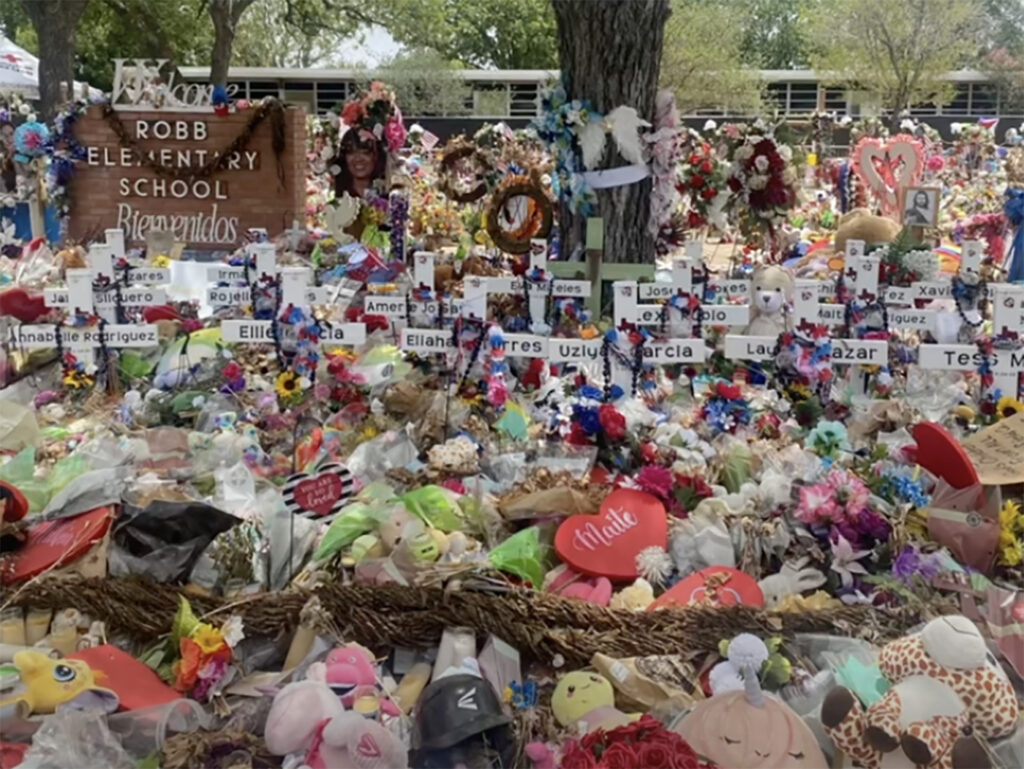 The memorial outside of Robb Elementary School in Uvalde, Texas. (Photo/Justin Valle)

Editor’s note: Red Line Project reporter and UIC student Justin Valle interviewed his cousin,  Julian Salazar about Julian’s younger sister, Layla, who died in the Uvalde school shooting. This Q&A has outtakes from their conversation. Journalists typically don’t interview family for stories, but the sensitive nature of this piece deemed it appropriate based on our principles and policies.

On May 24, 19 children and two teachers would attend their elementary school for what would be the final time.

That day, Salvador Ramos, 18, entered Robb Elementary and shot them with an AR-15. Of the 19 children, all ranged in age from 9 to 11 years old.

One of the children was Layla Salazar, 11. Layla was a sassy yet sweet girl with ambitions of running track, becoming viral on TikTok, and cheering the Dallas Cowboys to a Super Bowl win.

While her ambitions will not be fulfilled, her legacy lives on, mainly through her family. Julian Salazar, 26, is one of her brothers. It’s important to her family that her name and memory live on, which is his motivation for doing this interview.

Valle: Julian, how have you been doing recently?

Salazar: I’ve been going to work to stay busy. I got a photo of her on my wall up in my room, so I think about her a lot. That doesn’t go away

Valle: Following the shooting many people in the Uvalde community or Uvalde county kinda came together to promote the “Uvalde Strong” campaign. Knowing you were directly affected, did you feel any pressure to follow this type of campaign?

Salazar: No. It wasn’t difficult because everything was so random. Uvalde is quiet and small so basically it was weird. I wasn’t the only one, my mom, my dad, my brother, and of course there was other or everybody else. Plus all of it was for my sister or victims so I had no problems celebrating Uvalde strong

Valle: What was it like seeing LeBron James and other celebrities demand change for gun laws?

Salazar: I thought it was surreal. Uvalde was in the news for the wrong reasons. That wasn’t what Uvalde wanted. Seeing him and [Golden State Warriors Coach] Steve Kerr say stuff meant a lot. For these celebrities to know about what’s happening in a small town is surreal.

Valle: Most noteworthy of all the celebrities who paid homage or commented on Uvalde was President Biden. Now you actually got to sit down and meet with the President. Can you expand on what that meeting was like?

Salazar: The meeting was pretty cool. It was cool because I never met anyone big. I never met anyone big like him. And I was scared too. And, and, and it’s funny, because he ended up coming to the table. We were all sitting and I spilled my glass of water. I spilled water right in front of the President. I was like, I’m sorry Mr. President. I was nervous. Uh, I don’t know how to act around big people

Valle: Now, now that happened very, very shortly after the incident and you Uvalde right?

Valle: What was that summer like? Did you spend the rest of the summer out in Uvalde?

Salazar: I spent the rest of the summer in Elgin [Illinois].

Valle: Now, were you in Elgin when the shooting at the parade in Highland Park occurred?

Valle: What emotions arose when that event happened?

Salazar: The emotions I felt were like, man what a shame. Like I know exactly how everyone felt. I was watching the news. And basically, I saw people crying and I thought man I know what they are going through. Um, it brought back learning my sister got killed. I mean, I wasn’t angry. But like, I guess. I was like, more like, I can’t believe this happening again.

Valle: Now, something that actually did anger a majority of the country was the leak of a video that contained images and video/audio from inside Robb Elementary. Now, like I said, because this video was leaked, how much of a surprise was it to you? And how did this video affect you and your family?

Salazar: I don’t think the video should have been released on social media plus the public is bad because nobody was thinking about how the families of the kids would feel. As soon as they got out. It brought back that day where we first heard everything that happened. I didn’t know how my sister was or if she was crying and probably calling our names now we wouldn’t see her. And I’ve only seen that video two times. Having to hear all the sounds and hearing the kids cry was horrible.

Valle: Now, I’m sure during this time, you kind of relied on your family.  I know that you actually had a lot of family from Elgin or from the surrounding areas and counties in Texas come to you guys in the middle of June. How did this help? Did it make things easier? Did it make things more difficult? What was it like when you had a lot of family come to you guys near the funeral?