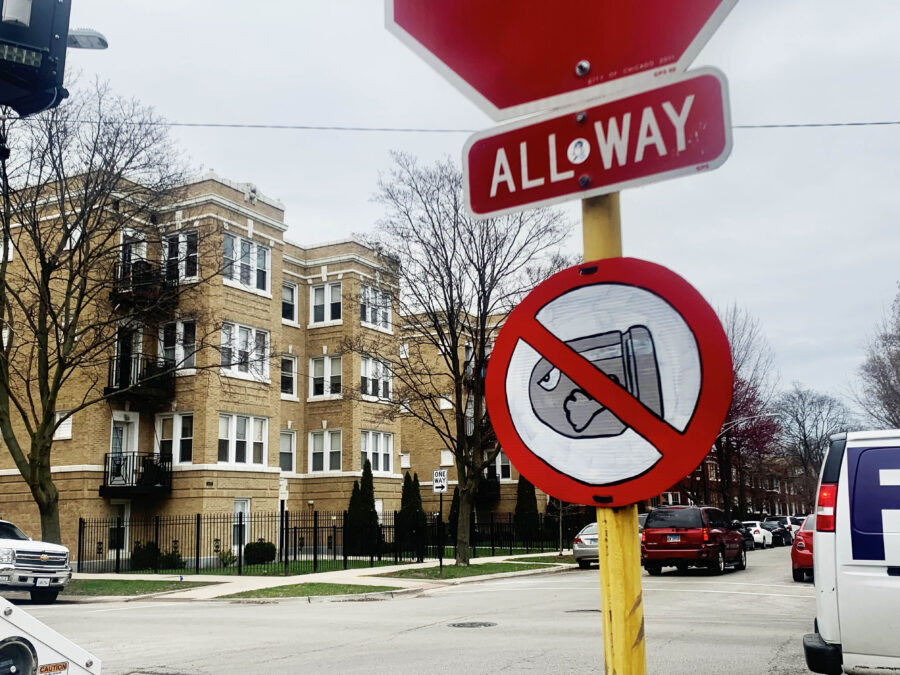 As a resident of Albany Park since 2010, Mildred Flores has seen her neighborhood take a massive shift, especially since the start of the COVID-19 pandemic. The number of violent incidents has increased dramatically since 2019, with violence seemingly constant for residents like Flores.

“I would say it’s always with a fear of a shooting happening,” she said.

Between the streets of Pulaski and Kedzie lies Albany Park, a Northwest Side neighborhood that has come to be known as Chicago’s “entry port” for immigrants. Despite being a neighborhood where culture and diversity thrive, residents have been expressing concerns over their lack of safety.

Flores has been the witness to several violent acts, and shared one that occurred on her way home from school. She described one incident in which  two cars were chasing each other and people were firing shots as she walked home on the sidewalk next to them.

While there is a police presence in all of Chicago, Flores explained the fear and negative impact that a heavier police presence could have on the community, if residents were to report every violent encounter.

“Mostly fear and also just being a minority, we feel like the authorities won’t always say for us, and we might actually be negatively impacted if we speak up,” she said.

Statistics from the Chicago Police Department from Sept. 29, 2021 to Oct. 5, 2021 showed that while murder, robbery and sexual assault crimes decreased, other crimes such as theft, motor vehicle theft, burglary and aggravated battery crimes increased. Furthermore, motor vehicle theft and burglary crimes have doubled.

Residents have attempted to take matters into their own hands by adding extra safety measures. Fences are now seen in nearly every front yard and security cameras are rapidly being installed outside of homes.

Claudia Pizarro, who has lived in Albany Park since 2002, knows too well the frustrations of these additions. While trying to fall asleep one night, she woke up to gunshots just outside of her house.

“I was even thinking that, you know, maybe a bullet can come through the window,” Pizarro said of that night.

After checking the security cameras, Pizarro realized that the incident occurred just outside of the field of view.

Down the street from her house is a violence hotspot that has grown infamous amongst Albany Park residents: the intersection of Drake and Ainslie.

In 2020, a condo building in front of the intersection had installed cameras and began to upload any useful footage it captured to the YouTube page Drake and Ainslie.

With video footage ranging from car crashes to vandalism to drive-by shootings, the YouTube channel highlights Albany Park’s violence and crime issues. Many of these videos had occurred in broad daylight as well.

In March, the Chicago Police Department put up a camera at the intersection to steer gangs away from the intersection and to capture anything that did occur. Within a matter of days, the camera was shot at and destroyed. Thus, the violence continued.

The camera has been replaced now and Pizarro has noticed a big difference. She has not heard any gunshots since the camera went up two weeks ago.

Luis Sinchi works in Albany Park as manager of operations at Communities United. This organization focuses on youth investment, immigrant rights, and on furthering affordable housing for five neighborhoods, including Albany Park. After working up close with the neighborhood for the past decade, Sinchi has seen the rise in violence firsthand and understands the nuances of crime spikes.

Residents attribute the violence to rising rents, the closure of the Albany Park Youth Center in 2017, and an increase in gang presence in Albany Park could be among the contributing factors to the rise in violent crimes. All of these issues are urgent, but Sinchi understands the solutions are time-consuming because of resource allocation and general project length.

In the meantime, Albany Park residents must rely on small changes, like the camera on Drake and Ainslie, to ensure their safety. But how can one camera protect an entire community? Chicago’s lengthy history of organized crime and gang presence is certainly far from coming to a close. In fact, 2021 saw the most violent crimes, including homicides, in nearly 25 years. The simple answer: it cannot. But we can look at other facets of the violence spike.

In 2017, a branch of the Albany Park Community Center on Kimball and Ainslie closed down. This branch, however, focused on GED certifications, job training, and early childhood education programs. With schools cutting their afterschool programs as well, this closure marked a strange beginning for many children in Albany Park.

Sinchi echoed this research as he described the effects that school resources have in kids’ lives. Elementary schools and high schools need adequate funding for all kids in the community. Without this, there are no positive forces pushing kids away from the streets.

According to the University of Maryland research, young people behave based on their observations of the world around them and can be easily susceptible to negative paths if that is all that is presented in front of them.

This lack of community investment, as Sinchi puts it, is then seen into adulthood. The cycle of violence continues as each generation passes through without a change in resources and educational programs.

However, being in school doesn’t mean being safe. In February, Albany Park residents were notified of a shooting that occurred in front of the Alessandro Volta Elementary School.

The shooting itself was right outside of the preschool’s doors, where a 16-year-old girl was shot and wounded around 10 a.m.

“It just feels like parents send their kids without knowing if something’s gonna happen to them,” Flores said.