Home » Crime » Wicker Park Carjackings: The Fear of Going for a Ride

Wicker Park Carjackings: The Fear of Going for a Ride

By Lulu Anjanette and Gina Vega 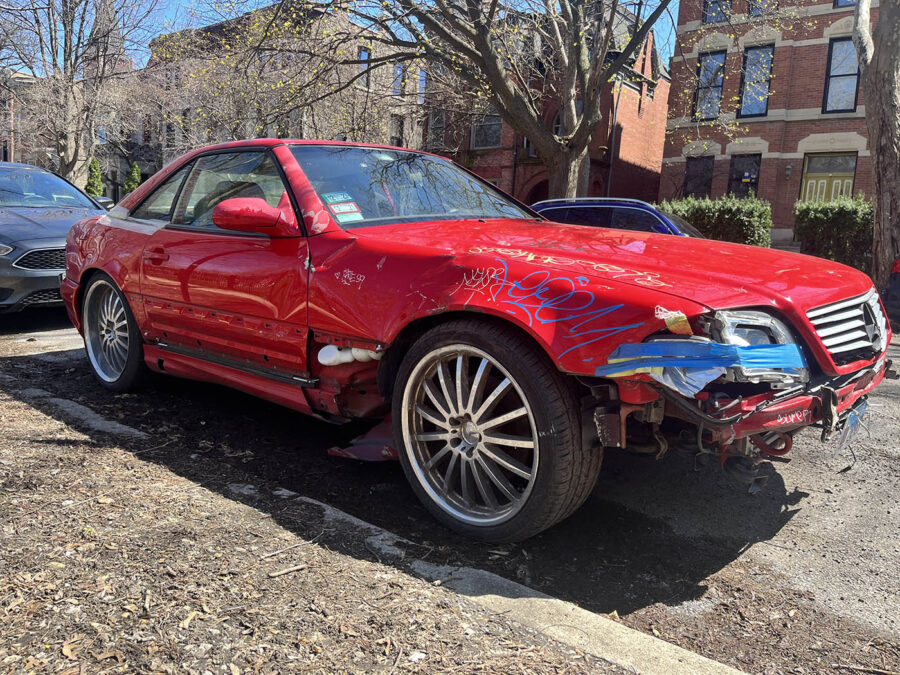 Carjackings have been on the rise in Wicker Park and either attended or unattended vehicles have been targeted for car parts or for vandalism. (Photo/Gina Vega)

In the daytime, the Wicker Park neighborhood fills with shoppers or people eating at the multiple restaurants on both sides of the streets and by night, the streets become more crowded and more vibrant.

However, some area residents say they have grown afraid to step outside of their homes to go to their car because of the fear of being hurt.

Tommy Almanaza, a long-time resident of Wicker Park, stated that he and his friend were almost victims in a carjacking when they were walking outside of Wicker Park’s many businesses.

“I think the other day, I was just with my friend,” Almanaza said. “I forgot what store we were at, but I only remembered that as we were walking out, like these three guys, right away, were standing in front of his car.”

“I think they were trying to take the rims off of them because they had a couple of things like the nuts out,” Almanaza said.

Their initial reaction was what anyone would react; shocked.

“We just kind of stood there for a second until my friend processed what was happening to his car,” Almanaza said. “And when he started yelling at the guys to leave, that’s when they just booked it.”

This experience changed the way Almanaza and his friend felt about their safety in Wicker Park.

“You just expect to walk to your car and as you walk out, you hear something happening,” Almanaza said.  “You’re kind of, it’s more like a deer in headlights type of moment. What do you do?”

Since late last year, the number of carjacking cases around the Wicker Park neighborhood had spiked tremendously. With four carjackings happening in the span of less than a week. The highest was four carjackings in one day, according to the 14th District Chicago Police.

Arrest rates are low with only one in eight carjackings in Chicago in 2020 resulting in arrest, according to a study by the University of Chicago. From these arrests, 61% are of youths age 17 and below.

Wicker Park resident Chloe Osberg said neighborhoods like Wicker Park can have as much police patrolling as they want, but they don’t contribute to the decrease of carjacking crimes.

“I just don’t feel like they do much, and I don’t think they help with crime in my neighborhood either,” Osberg said. “I don’t know much about the aldermen or the policies they’re making in Wicker Park, but I would just like to see some sort of action.”

She said that a big community presence is what helps others prevent crimes since most of those who commit the felony often get overwhelmed by the sheer presence of a potential witness to their crime.

“But, I definitely think people’s presence does a lot more to help lessen crime in neighborhoods just because people are less likely to commit crimes when there are many witnesses to see it happen,” Osberg said. “Wicker Park is a great community of people. It’s a thriving neighborhood. And it’s growing. So just to see that people care about the community and continue to just watch out for each other. It’s just something that is great to see.”

Back over by Bucktown, it has been said that residents who have experienced similar attacks have put their foot down and started up the Bucktown’s Neighbor Association, which hires private security to patrol a different part of the neighborhood every day.

Christopher Powell, a graduate student instructor at the University of Illinois at Chicago in the Criminology, Law and Justice Department, said there are several hypotheses for the increase in carjacking cases these past few years.

“There’s to me, no doubt that part of the explanation lies in the incredible challenges brought on by the pandemic,” Powell said. “I’d be interested to see what the statistics look like on homelessness and food insecurity and my suspicion would be that they are strongly correlated because a lot more people are in crisis, which, unfortunately, only exacerbates problems like carjackings.”

Trends: Google searches on carjacking in Chicago since the early days of the pandemic

Ever since the COVID-19 outbreak began, violent crime rates around the United States have increased exponentially. The overall violent crime rate — which includes murder, rape, assault and robbery — rose about 5% in 2019, according to FBI statistics.

“There’s also, rightly or wrongly, less motivation, less incentive, or even less ability in many cases for police officers to engage in high vehicular pursuits,” Powell said. “And so, if that’s the case, then it becomes less risky to engage in carjackings.”

According to The Civic Federation, a blog that reports on recent carjacking incidents within Chicago, carjacking incidents often have a very low rate of rate resolution. This means that because most carjackings don’t occur often, the way to handle an event much like that has started to increase in 2020, and there is no other solution other than to increase police patrolling in neighborhoods like Wicker Park.

“Oftentimes you know, the people who are doing it are juveniles,” Powell said. “We don’t necessarily expect seventh, eighth or ninth graders to be engaged in violent crime, but sometimes that’s exactly what’s going on.”

“It’s certainly one of the more visible instances of crime, especially when it happens in highly gentrified neighborhoods like Bucktown and Wicker Park,” Powell said.  “And so the idea that there’s vulnerability to violent crime and in spaces that attract metropolitan Chicagoans, it creates a lot of drama that creates a lot of pressure. You know, to do something.”

He argues that the rise in violent crimes in the past produced an avalanche of punitive, tough-on-crime sentiment that made its way into legislation.

“In a sense, history doesn’t always repeat itself, but it rhymes,” Powell said. “And I’m not thrilled to see where that goes.”

Brielle Conwell discusses how this three-part carjacking project was reported.