Home » Crime » Security In Chinatown: What Improvements are Being Made

Security In Chinatown: What Improvements are Being Made

CRIME: City and state officials weigh in on the recent spike in criminal activity in the Chinatown neighborhood of Chicago and discuss the effects. 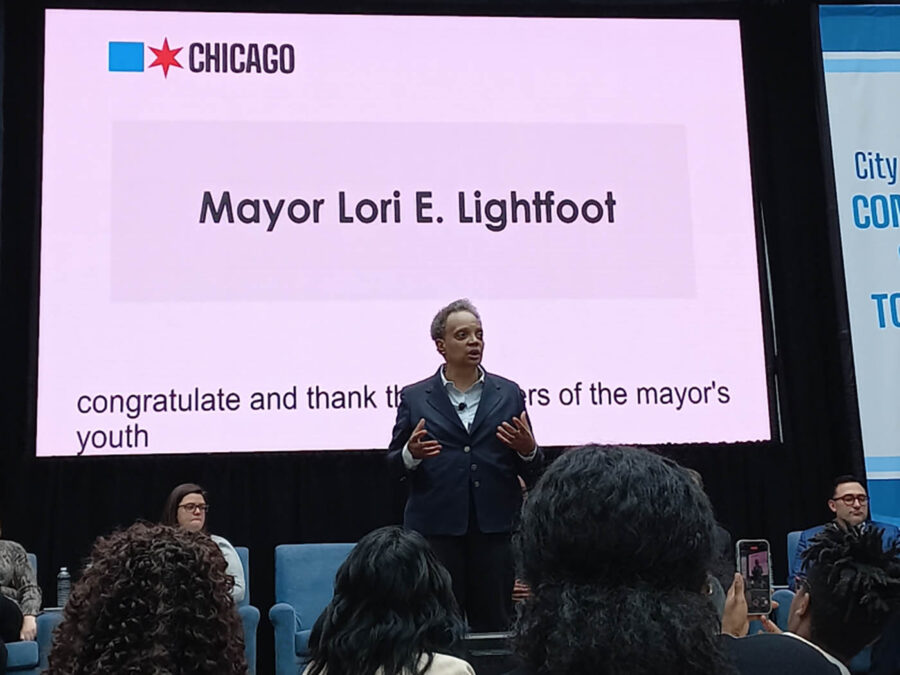 Chinatown has seen a dramatic increase in crime within recent years, largely during the COVID-19 pandemic. This escalation has raised heavy concerns for safety within the Chinatown community.

One of the most recent acts of violence in Chinatown was a homicide that involved elderly resident Woom Sing Tse, which was reported on Dec. 9 at 247 West 23rd Street. The incident occurred directly across the street from John C. Haines Elementary School.

Tse was shot 22 times and killed while walking to obtain a newspaper at noon, according to police. The accused gunman, Alfonso Joyner, was caught and charged with first-degree murder. No apparent reason was found for the shooting.

Catherine Moy-Davis, the principal of John C. Haines, described how the shooting happened that day.

“Some of the students were outside at recess,” she said. “The shooting happened maybe 15 feet away from the office.

“We had to do a quick lockdown. So all the children came inside from recess. We turned off the lights, and I went on an intercom. It was a very scary moment for everyone, myself included, just because I’ve never had to do anything like that.”

“We do have two security guards in the building from Chicago Public Schools,” she said. “We also have to make sure that we are still continuing drills. and then just talking to [the students] about being safe, going home, walking in pairs. We did hold a tabletop conversation with mental-health service providers for this in terms of talking about trauma.”

Chinatown has a reputation as a relatively safe neighborhood in Chicago, with security cameras placed in the streets and central square, as well as having a close-knit community.

“It devastated this community, people felt very violated in their own neighborhood. It was very sad, tragic,” said William Schejbal, the coordination officer from the Chicago Police Department’s 9th District. “Citywide, there’s been an uptick everywhere in everyone’s neighborhood of property crimes, and unfortunately, violent crimes.”

As a coordination officer, Schejbal communicates directly with businesses and local community associations in Chinatown as well as other neighborhoods throughout Chicago. He helps to ensure that the organizations and community members understand what the police department is doing for the city.

When questioned about the feeling of safety in Chinatown, several local residents answered similarly that the safety situation did not seem to be very good at the moment. Nearly every local asked had expressed their wishes to remain anonymous. They did not want to give any identifiable information that could be linked back to them.

Edith Liang, who lives near Chinatown, said of public safety in Chinatown: “I feel like lately, crime has been significantly rising in our community. So that makes me fear for my elderly neighbors that are in Chinatown, and especially with violent crimes and also carjackings.”

Liang recounted an event in which her cousin was carjacked in Chinatown. Her cousin was able to escape unharmed, and the incident left a deep impression on her and others close to her.“Because a situation like that happened to someone close to me, it makes me fearful to walk around Chinatown late at night, even during the day now,” Liang said. “Growing up in that community, a lot of the elderly people have routines. So it makes me fear for them. And also myself when I walk alone in Chinatown.”

Liang mentioned senior members living in Chinatown, who tend to have more difficulty staying safe. Elderly citizens are physically limited in mobility, and thus are more vulnerable to attacks.

When asked about how the safety situation may be improved, Liang said that it would be difficult.

“I think it all comes down to education,” she said. “If we educate our younger ones the right way, and teach them the morals that they need to be taught and teach them that education is really the foundation of their growth, then I feel like that would solve the root problem.”

Not only were acts of violence felt deeply by Chinatown residents, but the effects also echoed throughout the rest of Chicago as well.

In a Youth Community Safety Town Hall meeting held on April 2 at the Harold Washington Library, Mayor Lori Lightfoot spoke on the city’s desire to improve the safety in Chicago neighborhoods.

“What we’re trying to do with the investments that we’re making, and the way in which we’re engaging in community is to really build in every single community, safe places,” Lightfoot said at the event.

The audience was seated at many tables for the event, with the younger participants upfront. Attending city officials, including Lightfoot herself, visited the tables to hear the opinions of young people about their neighborhoods and the city.

“We really want to make sure that we work with the Chinatown community – many of whom are immigrants – so that they don’t feel like they can’t speak up and talk about the issues and challenges that they’re experiencing in the community,” Lightfoot said at the event.

Lightfoot added that she and her office are increasing police resources in Chinatown, as well as working with the Chamber of Commerce, various service organizations, and stakeholders.

Other city officials also attended the event, such as representatives of the city as well as leaders from the Chicago Police Department. They informed the audience of their current work for the city.

“It’s got to be a community effort; we need, when crimes are happening, for our community members to report crimes,” Ald. Nicole Lee (11th Ward) said during an interview at the Town Hall meeting. “It’s one of the bigger challenges in our community and the Chinese community, that sometimes people don’t want to report crimes. So we’re working on getting more language-skilled police officers, as well for the district.” 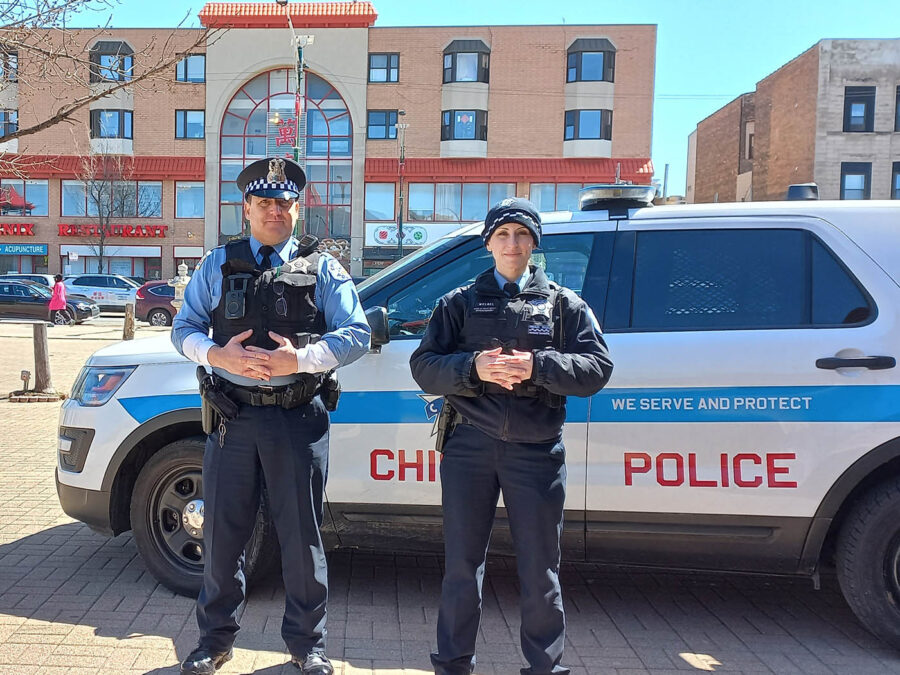 The safety of citizens is addressed on a broader scope of the state as well. Illinois State Rep. Theresa Mah shared some of the state’s efforts toward community safety in an interview.

“We added more than $200 million for public safety and law enforcement measures,” she said. “This is in addition to the $250 million that the governor had originally set aside for reimagined public safety.

“Some of those programs had already started earlier this year. They’re grant programs that are designed to address public safety through some of the root causes.”

Mah also described bills recently set in place for crime prevention and public safety. One such bill turns carjacking into a Class One felony for adults. Another increases funding for highway cameras, and compensates residents for sharing footage from their security cameras with law enforcement. One more bill places more attention on witness protection and victim responses.

“We have been hearing from residents who have expressed concern about these things,” Mah said, “and so we’re trying to put together legislation that’s smart on crime and assists law enforcement and increases the technology to increase clearance rates and then also supports victims of crime in a more robust way.”

When asked what community members could do to help improve safety, Schejbal said that community organizations and the police department need to be in touch with one another.

“We need the people in these community groups to feel that they can reach out at any time to talk to us,” he said. “Let us know what the problems are. Don’t just stay silent, let us know.”

Schejbal emphasized the importance of citizens familiarizing themselves with others in their community.

“Be outside, talk to your neighbors,” he said. “And when you go to your local store, say hello to the people that work in the store so that they know you and you know them.”

Communities need more citizens to stay aware of what happens in their neighborhood, as Lee highlighted. It will require the contributions of more members for the well-being of each community.

“Community safety is something that we all have to take some ownership of,” Lightfoot said.