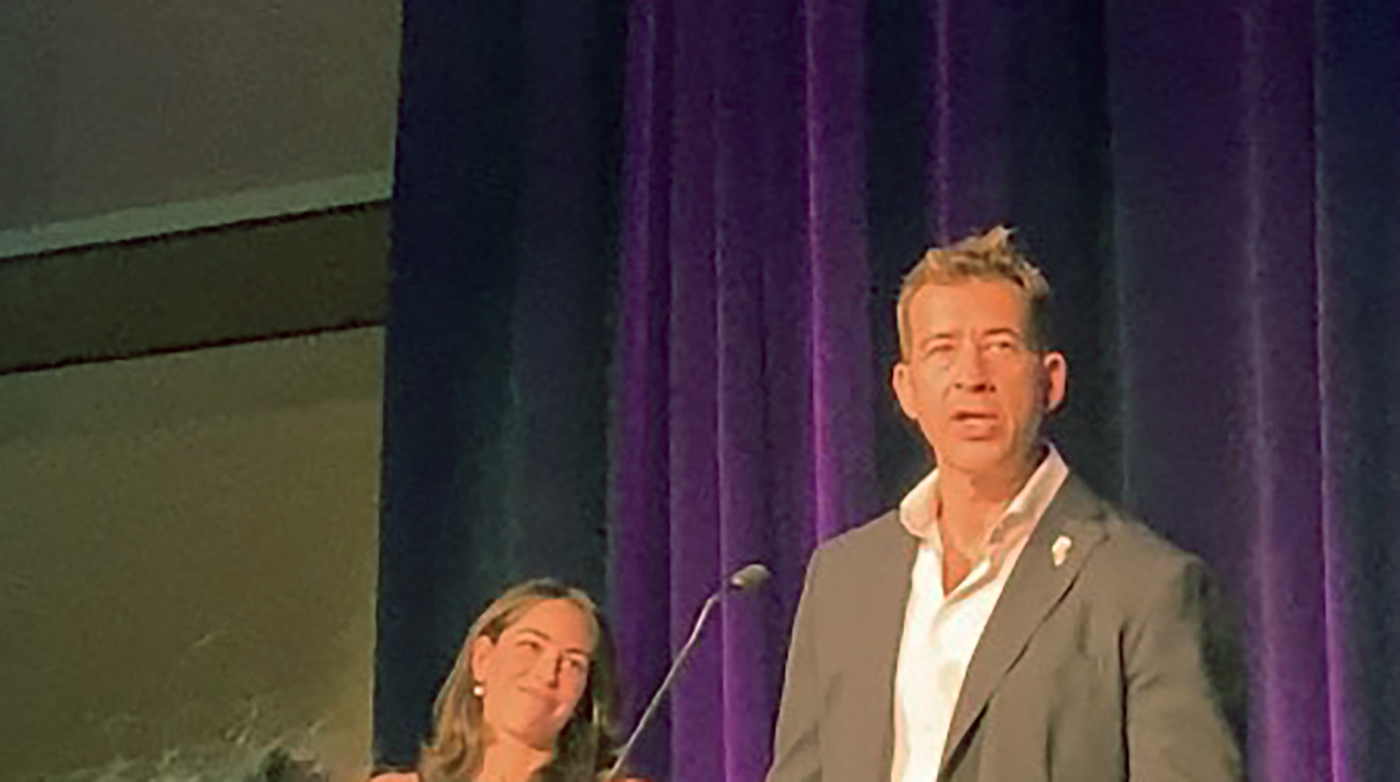 Alexi Giannoulias delivers a speech to his supporters upon winning the election for Illinois Secretary of State.

Democrat Alexi Giannoulias took the stage Tuesday night to claim his title of Secretary of State after a convincing win over Republican nominee Dan Brady.

“It is such a breathtaking feeling to share this moment with all of you,” Giannoulias said as stepped to the podium, reflecting upon his campaign experience throughout the pandemic.

“It is an absolute privilege and honor”, Giannoulias continued, choking up. “To be the first person in 24 years to be able to say ‘thank you’ to the people of Illinois.”

The race for Illinois’ new Secretary of State has been highly anticipated as Jesse White is retiring after serving six full terms, a total of 24 years in the office.

There was a wide variety of experiences among the candidates for position. Giannoulias, former state treasurer and banker, faced Brady, a funeral home director and former coroner, and Stewart, who used to be a professional wrestler.

Giannoulias, who formerly served as Illinois’s youngest-ever treasurer in 2007, has been out of office ever since ending that term. Giannoulias ran for the U.S. Senate in 2010, but lost the race due to the failure of his family’s Broadway Bank. Authorities say the bank approved loans for alleged organized crime links before the bank’s failure in the middle of Giannoulias’s campaign for Senate. As a loan officer for the bank, Giannoulias was never formally accused of wrongdoing.

Throughout the campaign for Secretary of State, Brady has used the history of Giannoulias’s family’s business as ammunition against his campaign. Brady stated that given his track record, Giannoulias could not be trusted with the divisions of security within the secretary of state’s office.

Giannoulias labeled Brady’s claims as “typical politics” and a baseless attack as a result of Brady’s lower digits in the polls. Giannoulias responded to the accusations by criticizing Brady’s support of former President Donald Trump. He compared Trump’s past baseless election fraud claims to Republican Brady.

“What they’re doing to the very foundation of democracy is dangerous,” Giannoulias said.

Giannoulias’s election party took place at the Sheraton Grand Ballroom in downtown Chicago. Supporters mingled and enjoyed the open bar for nearly three hours after voting closed while awaiting the announcement. The lull of conversation among the crowd quickly turned into cheers of excitement as it was announced that Brady had conceded.

The room filled with loud hip-hop music and lights flashed as the cheers continued and enthusiastic Giannoulias took the podium with his wife and three young daughters beside him.

Giannoulias presented an emotional and heartfelt speech, individually thanking numerous people including staff, supporters, and especially his family. He refrained from making any negative remarks toward Brady or his supporters.

Giannoulias dedicated his campaign to his late father, Alexis.

“If you never met Mr. G you missed out, because he was the greatest…I miss him every day,” Giannoulias said. “Tonight, dad, this campaign is for you and I love you so much.”

Giannoulias also took time within his speech to thank his wife, who was standing beside him holding their youngest daughter. He praised her for her support throughout his campaign and for her grace and dignity over the course of the past two years.

“There are plenty of people across the country giving speeches tonight thanking their wives,” Giannoulias said. “Nobody got a wife like I do.”

He finished his speech by addressing his three young daughters.

“Lastly, to my three girls, who are the greatest thing that’s ever happened to me”, Giannoulias said. “I hope that one day you have just an [understanding] of how much I love you and how everything that mommy and daddy do is for you.”

Giannoulias was emotional throughout his speech and he put great emphasis on his family and his daughters as the motivation behind his campaign. The crowd was enthusiastic and the room vibrated with cheers and applause throughout the 15-minute speech.

“To the people of Illinois, to my friends and family, to all of you that are here, I hope we ran a campaign that you can be very proud of,” Giannoulias said. “More importantly, I promise you, we will run a Secretary of State’s office that you will be very, very proud of.”