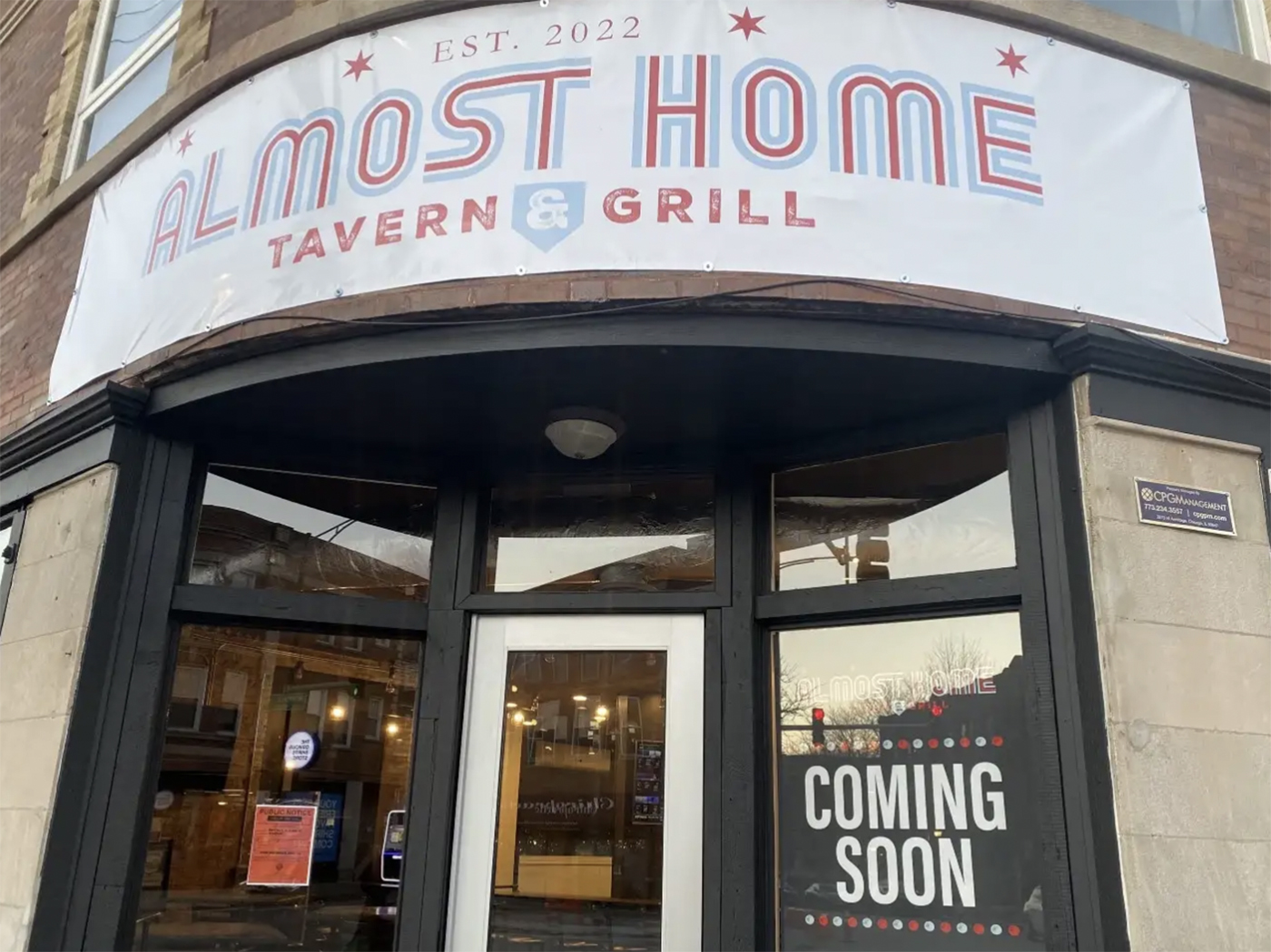 Almost Home Tavern & Grill puts up signage in preparation for its grand opening. (Photo/June Hall)
Since the late 1800s, Chicago has been known for its lively nightlife. While in the early days of the bar and club scene, businesses were predominantly in the Near South Side neighborhoods, the city has since seen a drastic shift in where establishments choose to open up, data show.

The Near North Side and Loop neighborhoods especially have seen a surge in bars and restaurants looking to obtain liquor licenses in the last century.

In 2022, the Near South Side has 28 businesses with this type of license, making up less than 1% of all consumption on-premises licenses. This data show that areas known for their nightlife are now far more condensed in the North Side and in the growing West Side/West Loop areas than on the South Side.

Besides the West Loop, one of the growing areas for licenses in the past few years has been Wrigleyville, with several new establishments opening during and after the remodeling of Wrigley Field. The neighborhood currently has 69 businesses with consumption on-premises licenses, and new establishments have continued to open their doors.

Partners Matt McGinnis and John VonPerbandt are working to open their first bar, Almost Home Tavern & Grill in the coming weeks in Wrigleyville.

Located at 3801 North Clark St., Almost Home Tavern & Grill will be a neighborhood sports bar offering a full food menu and a friendly atmosphere. McGinnis and VonPerbandt have worked in the industry together for years, helping other businesses succeed before deciding to start their own venture. They unpack how having connections with other businesses in Wrigleyville helped them in the process.

“I think everything about this business is the people,” VonPerbandt said. “We know everything there is to know pretty much about running a place. But searching for the space, to negotiating leases, to signing the lease, to even finding the lawyer that did all of the licenses for us, it all comes from previous connections. So it’s all from people, and they really went out of their way for us. I’ll never forget it. It’s amazing.”

While opening a bar in an area with much competition can present challenges for new businesses, McGinnis and VonPerbandt have been able to use their connections to nearby establishments to their advantage as they work through the intricacies of starting a new venture. After passing their inspection this past week, the owners now move on to getting employees on payroll and carrying out tastings for their liquor program before their grand opening in the coming months.

Many factors can go into the number of viable bars and restaurants in any neighborhood. Dr. Keisha Farmer-Smith, who teaches in the urban planning and policy department at the University of Illinois Chicago, has spent a large portion of her career looking into community sustainability and how this is impacted by the history of the environment. This also relates to where bars are located in Chicago.

“Has the neighborhood historically been full of certain types of communities? Like for example, is the community historically a working-class community or a community that has a lot of factories nearby?”

The Pilsen neighborhood, located in the Lower West Side, has historically been home to a predominantly low-income Mexican population. However, Pilsen is changing in the 21st century, as more middle-class and non-Latino populations move in.

This has led to gentrification in the area, and property values have simultaneously increased. With this, bars and restaurants have evolved as well. Many of the new establishments in the area feature gourmet food and craft beer.

While establishments look to open in Pilsen, they are still few and far between compared to the Near North Side and Loop neighborhoods. Located at 2119 South Halsted St., Pleasant House Pub is one of the 20 establishments in the Lower West Side that has a consumption on-premises license. Opening in 2011, the pub offers a British-inspired menu, draft beers, and a variety of cocktails.

“There are pretty few of us here in this neighborhood but I would say it is a less concentrated area. We have few public schools and a lot of houses,” Pleasant House Pub owner Art Jackson said. “I think it helps [our business] a bunch because that would mean people around here wouldn’t have to go further when they just want to grab a glass of beer. They would have a bar right here in their own neighborhood.”

While few bars and restaurants reside in certain neighborhoods, there are still many liquor stores available for residents to purchase alcohol. This distinction relates back to Farmer-Smith’s emphasis on the importance of looking to the history of these communities for an explanation.

“If you look at and compare not where bars and pubs are located on the South and West Sides, but if you compare it to where liquor stores are located, so many of the communities that I just named, like Garfield Park, for example, on the far-South Side, Roseland, a community that I live near on the mid-South Side, or Inglewood, these are all communities that don't have many bars and pubs,” Farmer-Smith said.

“They don't have many sit-down restaurants. They don't have much nightlife at all. And part of the reason is that historically, the media has portrayed these areas as having high crime. And it's been very difficult to get certain types of amenities in these communities. However, they have plenty of liquor stores.”

In recent years, initiatives such as Invest South/West have worked to provide funding for community development in neighborhoods on the South and West sides of the city. This initiative aims to look at what types of economic development residents want to see in their communities in hopes of fostering equity in previously underserved areas. While this spans much farther than the scope of bars and restaurants, it provides an opportunity for potential businesses looking to develop in these areas.