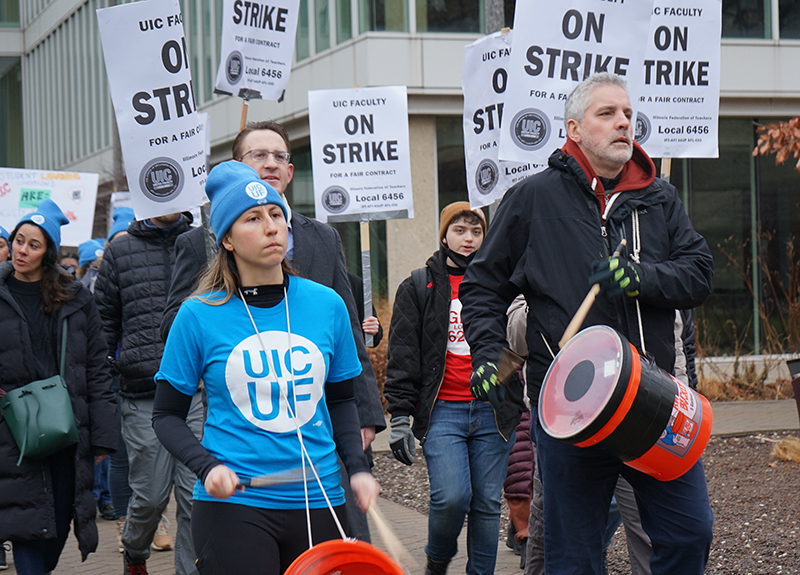 After nine months of negotiations and a weeklong campus strike, UIC’s faculty union and administration agreed to terms on a four-year deal late Sunday night. Classes resume Monday as the two sides continue to nail down final details.

The deal, which includes across-the-board raises as well as minimum salaries for tenure-track and non-tenure track faculty. The two sides agreed on $4.5 million in funding for student mental health care earlier in the week.

Sunday night’s agreement came on the heels of what both sides said was strong progress during a bargaining session that went late into Friday night. During that meeting, the administration agreed to an across-the-board raise, and both parties have settled on a first-ever $2,500 increase to all base salaries, prorated for full-time employment.

Other details of the contract, which must be ratified by an upcoming union member vote, are:

“We agreed to a four-year contract, but remain 3% apart on merit, compression, and equity raises over the course of the four years,” the union said in an email distributed Friday night. “We also need to negotiate retroactive pay, the order of operations for various types of raises, and a return-to-work agreement before we could suspend the strike.”

Friday was the fourth day of the strike after a 32nd bargaining session Wednesday night failed to end with an agreement. The session proved fruitful as the sides came agreed on the across-the-board raises.

“While we are more hopeful than we have been in a while, there is no guarantee that management will fulfill our hopes for this weekend,” a union membership email said. “We’ve certainly been disappointed before. This means we need all of you working to make sure we are prepared to continue a strong strike on Monday.”

Faculty had been striking over four key issues: Fair minimum salaries and salaries that keep up with inflation; earlier reappointment notice for non-tenure track faculty; Due process for tenure track faculty; mental health resources and learning disability assessments for students. Negotiations with university administration had been ongoing since last spring, and faculty went on strike late last Monday night after a 12-hour negotiating day.

Becky Bonarek, a non-tenure track tutorium in English lecturer and a member of the UICUF bargaining team, said Wednesday’s session was disappointing.

At noon Thursday, UICUF held a rally in the UIC East Campus Quad. Speakers included members of other major unions on campus including GEO, SEIU Local 73 and the Illinois Nurses Association. Members of the Illinois Legislature and Robert Reiter, President of the Chicago Federation of Labor, also spoke. 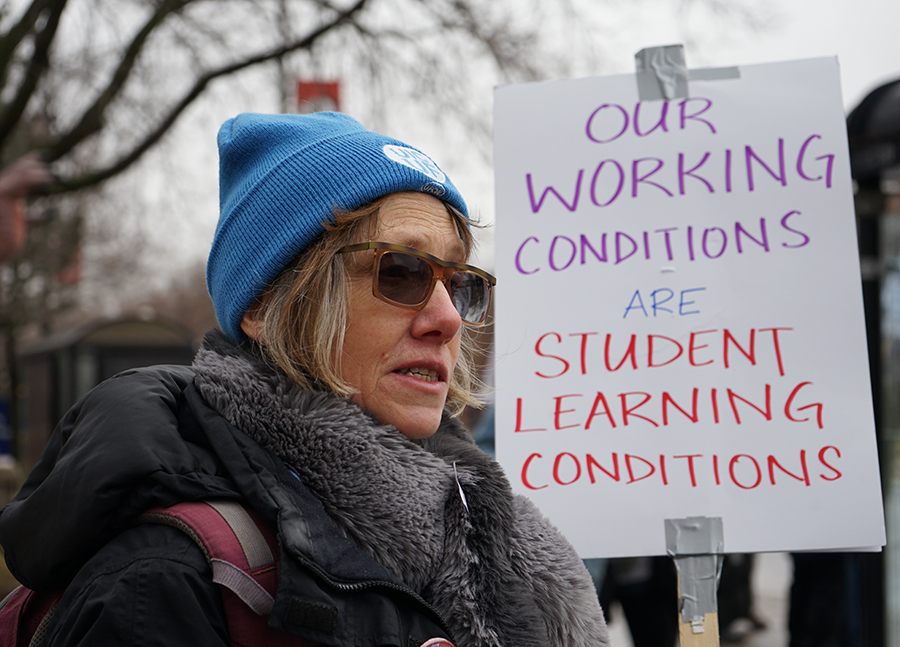 Faculty member Virginia Costello pauses to listen to a speech during the UIC strike rally on Jan. 19. Among the things the union negotiated for — better mental health care for students. (Photo/Lulu Anjanette)

Students that attended Thursday’s rally also expressed gratitude toward the faculty for striking to support student needs. Earlier in the week, the UIC administration committed $4.5 million over six years toward student mental-health services after pressure from the union during Monday’s bargaining session.

“I think it’s important that they’re fighting for disability testing,” Junior Chloe Swerdlick said. “I am fortunate enough to have had resources to get testing, but a lot of students here don’t. You have to have testing to get accommodations, so they’re suffering in class because we don’t have those services. Knowing that UIUC has them and we don’t is quite frustrating.”

“Our faculty are the backbone of this school,” Senior Shruti Bharatia said. “Many students will go to them for support and to talk to them because we don’t have enough mental health services. They’re the backbone not only for students’ education but also for their mental health.”

“Students around me have been saying things like, ‘I pay too much money to not be being taught right now,’” Celestino said. “To a certain degree, I agree. We shouldn’t be in this position. The UIC administrators should have been doing more to stop the strike before it started. I challenge those who don’t support the strike to do further research for themselves.”

Faculty are encouraging students to get educated on the strike’s key issues. Additionally, they are asking students to send an email to Chancellor Javier Reyes to voice their support.

“This is a great moment to challenge yourself to find out the facts, find out the information and then pick a side and join us at the picket line or put pressure on us to stop,” said Virginia Costello, a non-tenure track senior lecturer in English. “Of course, I prefer that you join us, but I’m an instructor and I prefer students to think critically rather than follow what everyone else is doing.”

The UICUF bargaining team has written a letter to UIC students. Team members have also provided a document with a detailed guide to their bargaining aims.

Many students’ main source of information about the faculty strike comes from official emails sent by the university.

“Having these ominous emails about tuition increases is a scary thing to read and I think the university is using that to [its] advantage,” said Hanna Ghalyoun, a clinical psychology doctoral student. “I don’t think it’s OK. Unless I’m going out of my way to find my own information, I only see the UIC administration’s point of view.”

The university administration has not been available for comment during the negotiations, but it continues to provide strike updates through email and a website. Late Friday afternoon, the chancellor’s office released a video statement by Reyes asking for both sides to resolve the strike and settle on a fair contract.

“We’re hopeful that something can be settled on Friday,” Bonarek said. “But we’re willing to continue striking.”

Editor’s note: The student journalists produced this story while working as paid freelancers, not as part of a class assignment. Mike Reilley, the editor of The Red Line Project, is a member of the UICUF. Read more about our principles and policies.