After the murder of George Floyd in 2020, cities around the country erupted into protests against police misconduct and brutality. The outrage highlighted gross mistrust many citizens held against their police departments, and some in larger cities, including Chicago, called for complete or partial defunding of the police, and a radical shift in transparency and accountability for officers.

Conversations surrounding police transparency and accountability have been visited for years, but it requires communication from multiple perspectives.

One way the City of Chicago and the Chicago Police Department went about this was the launching of the Police sentiment dashboard in November 2017. CPD along with its partners at Elucd, a data collection company, tracked citizens’ sentiment toward police in both safety and trust by the district.

MAP: Using the data from the Chicago data portal, the maps show police sentiment in trust and safety by police district.

According to the Chicago Police Department and Elucd, this data was captured by collecting ratings of police by a randomly selected group of people in each police district. Participants were reached through targeted ads and census data, they were asked the following to gauge sentiment scores:

The scores were then collected and combined into a weighted average, and then multiplied by 10 to create these scores, which are valued on a scale from 0-100. For the month of October, CPD scored of 59/100. 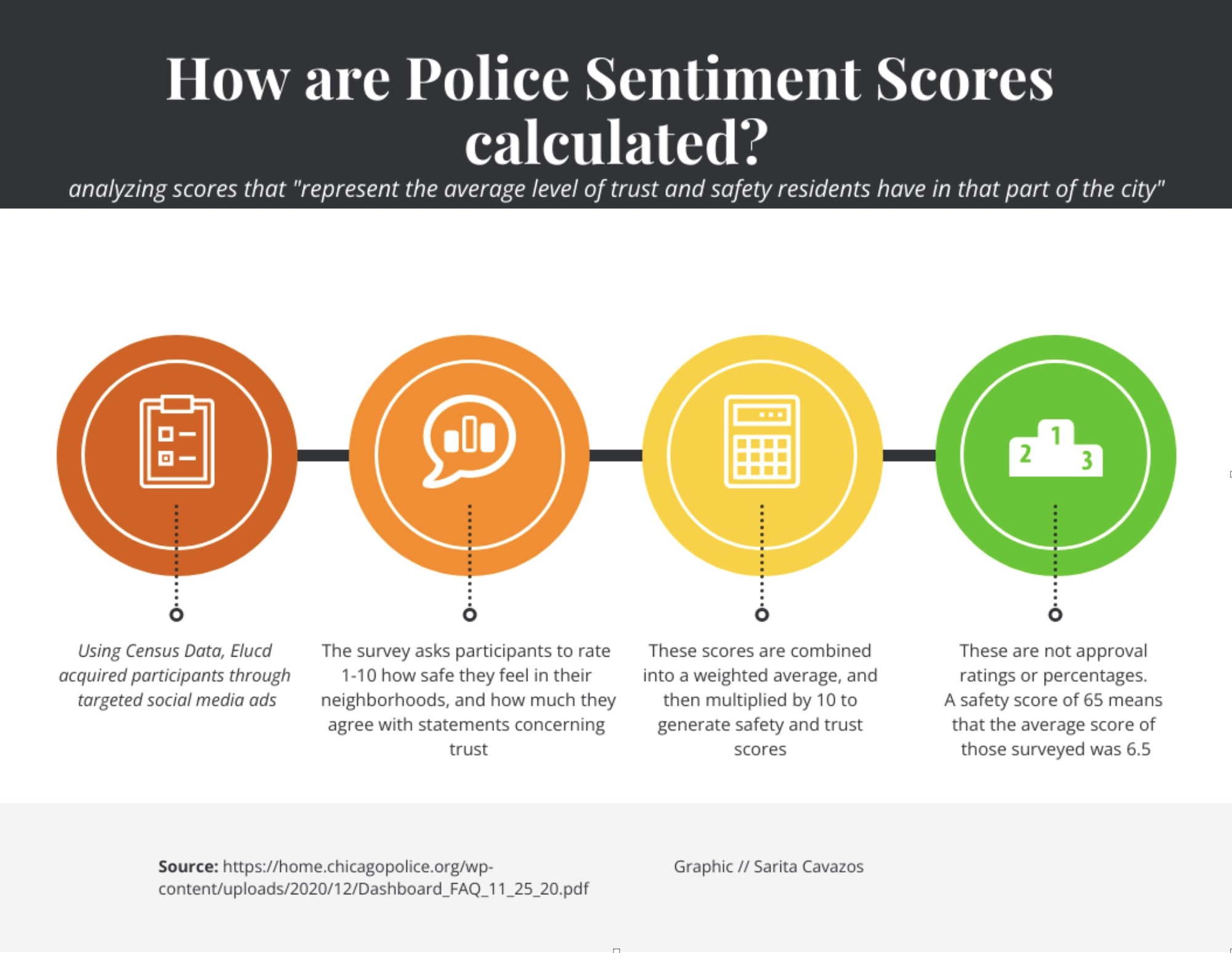 Because of how this survey acquires its data, it may not demonstrate the entire picture. Dr. William McCarty, an associate professor at UIC and the director of the Center for Research in Law and Justice at UIC, has run similar studies in the past, and says these sentiment scores don’t necessarily include key testimony from fundamental groups.

“One of the critiques I think I would have of this current sentiment score is that it doesn’t necessarily survey people who had contact with the police,” he said.

For several years, McCarty worked on the Police Community Interaction Survey, which worked by directly contacting and communicating with individuals who had direct interactions with the police.

“You know, the logic there is that we’re actually interacting with people, engaging feedback from people who’ve had contact with CPD,” McCarty said.

This is a distinctive tactic from the method Elucd and CPD uses to publish their sentiment data, but the survey is targeting individuals through ads on social media, meaning that there may be a certain audience that responds to the survey requests, further impacting the narrative that is displayed on CPD’s sentiment portal. McCarty recalled working with the Police Community Interaction Survey involved “60 or 70 questions” and only received “maybe a 5% response rate.”

“It’s just a subtle difference. But to me, a fairly important one of, you know, kind of a more direct indicator of sentiment,” said McCarty. “To me it is a little bit more relevant when you get people that have actually had a recent contact or experience with the department or the entity that’s being in question.”

While the social media aspect may bring in more responses, there is reason to doubt the accuracy of the audience. Tracy Siska, the Executive Director of the Chicago Justice Project, finds several issues with the survey, the algorithmic component of social media being one of them.

“I’ve lived in DC for two and a half years but because Facebook’s algorithm still has me in Chicago, I got requests to take that survey,” Siska said.

This could possibly mean people living outside Chicago, who have little to no interaction with CPD, are answering the survey and consequently distorting the data. He encouraged the department and its data gathering partners to have transparency on who is answering the data, especially because of the demographic algorithms of sites like Facebook.

“Facebook tends to be much more conservative and such,” Siska said. “So, I’d really like to know the nuts and bolts about what social media, how many people, what are the demographics and those that have faith they have in those demographics being right”

Siska also expressed doubt in the motivations behind acquiring and posting this data. Because its origin lies in CPD, he is wary of placing too much faith in the data.

“This is a total PR Stunt,” Siska said. “Basically, because they’re working in concert with the department. No serious research can be done where the department has some say in how the results are released.”

Siska’s sentiment harkens back to overall sentimental trust: there is a deep-rooted distrust of the department that goes beyond just on-the-job everyday policing. Kiera Markham, a Community and Social Justice Case Manager from Chicago, currently working out of Vermont, works directly with individuals who have had experiences with police and shares this sentiment.

“I know a really big sentiment around is that even if the cops are called, they’re either not going to show up, or they’re not going to do anything when they’re there,” Markham said, “I don’t want to say that there’s an idea of laziness. But I think there’s just it goes beyond a distrust of the police and distrust of the system at large is that they don’t think that it’s really for them. It’s only used in punitive measures. It’s not used for necessarily restorative purposes.”

CPD has unfortunately provided plenty of reason for distrust from the public as of late. with low vaccination rates amongst the department and misconduct surrounding the Anjanette Young case, CPD has a lot to make up for with the public. But Markham had a few ideas on where to start.

“There needs to be a pretty sizable upheaval, and just a real, you know, culture shock within law enforcement at large,” Markham said. “So, in my opinion, that starts with a lot of dismantling some of the systems or beliefs that it might have been founded on or values that they’re still acting upon.”

If you are also a Chicago resident, you can use this link to also participate in the survey.

CPD was contacted for comment, but has not responded yet.