By Rubi Valentin and Louise Macaraniag

Even after seven years of resistance from environmental activists nationwide, the Canadian pipeline company, Enbridge, declared the Line 3 pipeline fully operational on Oct. 1 of this year.

Encroaching on Anishinaabe territory and transferring to oil refineries in Indiana and near the Chicago area, this pipeline will deliver nearly a million barrels of tar sands crude oil each day. Line 3 is the largest project in Enbridge’s history and one of the largest crude oil pipelines in the world, costing upwards of $9.3 billion.

Line 3 extends from Alberta, Canada all the way to Superior, Wisconsin, crossing over 200 bodies of water, including the Mississippi River twice and Lake Superior. This poses a major environmental threat because an oil spill from Line 3 would inevitably cause the irreparable destruction of local ecosystems, the extinction of the Ojibwe people’s sacred wild rice, and risk poisoning millions of people’s drinking water supply.

This is especially a cause for concern due to Enbridge’s reputation for committing the largest inland oil spill in the U.S. In 2010, Enbridge spilled 1 million gallons of oil in the Kalamazoo River. The oil delivered through Line 3 can produce up to 170 billion kilograms of carbon dioxide per year. According to Stop Line 3 and Honor the Earth, this is equivalent to 38 million vehicles on the road.

“Line 3 will emit the equivalent emissions of 50 coal power plants,” in an interview with Laurel Chen of Resist Line 3 Media Collective. “And this is really at a time that we need to be stopping, shutting down and transitioning away from fossil fuels.”

Chicago has a stake in Line 3’s operations as the biggest metropolitan area in the region and home to a large financial hub. Activists have targeted Chicago’s Chase Tower and the Army Corp of Engineering as two major actors in contributing to the construction of Line 3.

JPMorgan Chase is the largest funder of fossil fuels, spending a quarter of a trillion dollars into fossil fuel projects in the last five years. However, despite their close ties to fossil fuels, they have recently joined the Net Zero Banking Alliance. This means that Chase has committed to aligning their lending and investment portfolios with net-zero emissions by 2050.

“The issue with Chase is specifically that they’re getting sustainability bonds as well, so they’re giving them a lower rate, and they’re giving them some preferred terms because they put solar panels on their corporate office,” Jessy Bradish of Chicago Against Line 3 said. “So, that gets them green points, and the fact that they’re violating treaty territories and building a toxic tar sands pipeline under the Mississippi is irrelevant.”

Moreover, gasoline made from tar sands is considered to be the dirtiest oil of them all, each gallon producing 21 percent more carbon dioxide emissions than conventional oil.

According to the Minnesota Department of Commerce,the “social cost of carbon” of Line 3 is $287 billion over the first 30 years of the pipeline’s life.

Line 3 also violates the treaty rights of the Anishinaabeg because it is endangering primary areas of hunting, fishing, wild rice and cultural resources in the 1854, 1855, and 1867 treaty areas.

From Minnesota to all across the states, water protectors, community members, and organizations have created a campaign to defund and stop Line 3. They have called on Minnesota Governor Tim Walz to stop the contract to construct Line 3 and have even taken this issue to a national level, pressuring President Joe Biden to halt operations.

“President Biden and Governor Walz, who really have had the power to shut down Line 3, have not taken steps to shut down Line 3 and have gone against their promises around addressing climate change and around respecting indigenous sovereignty,” Chen said. 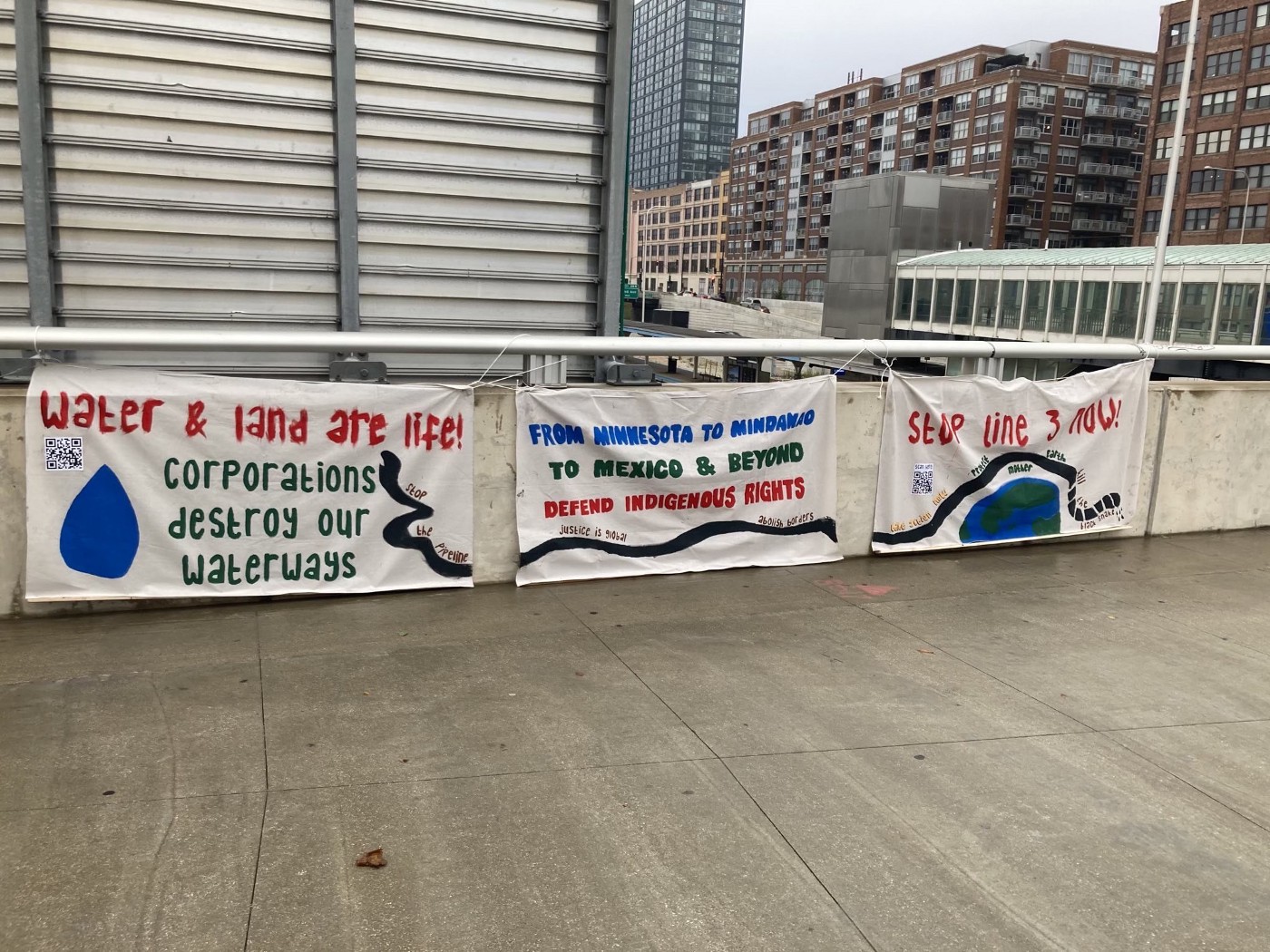 According to Bradish, advocates must make Chase aware that “this is not a good investment.” Furthermore, we must enlighten the public about how this will inevitably affect them due to its high potential of exacerbating climate change.

“This is probably going to be the last pipeline that gets constructed in the US,” Bradish said. “I think that the attitudes have really changed, and it’s not a guaranteed safe return, so we really need the banks to believe that.”

Activists in Chicago have come out to protest outside of Chase Tower to draw attention to their active role in funding Line 3, including Erin Rusmi of Rising Tide Chicago.

“Chase Tower is a place that we’ve targeted because it’s not only a branch, but there are corporate offices that are higher up in the building and their annual general meetings are held there,” Rusmi said. 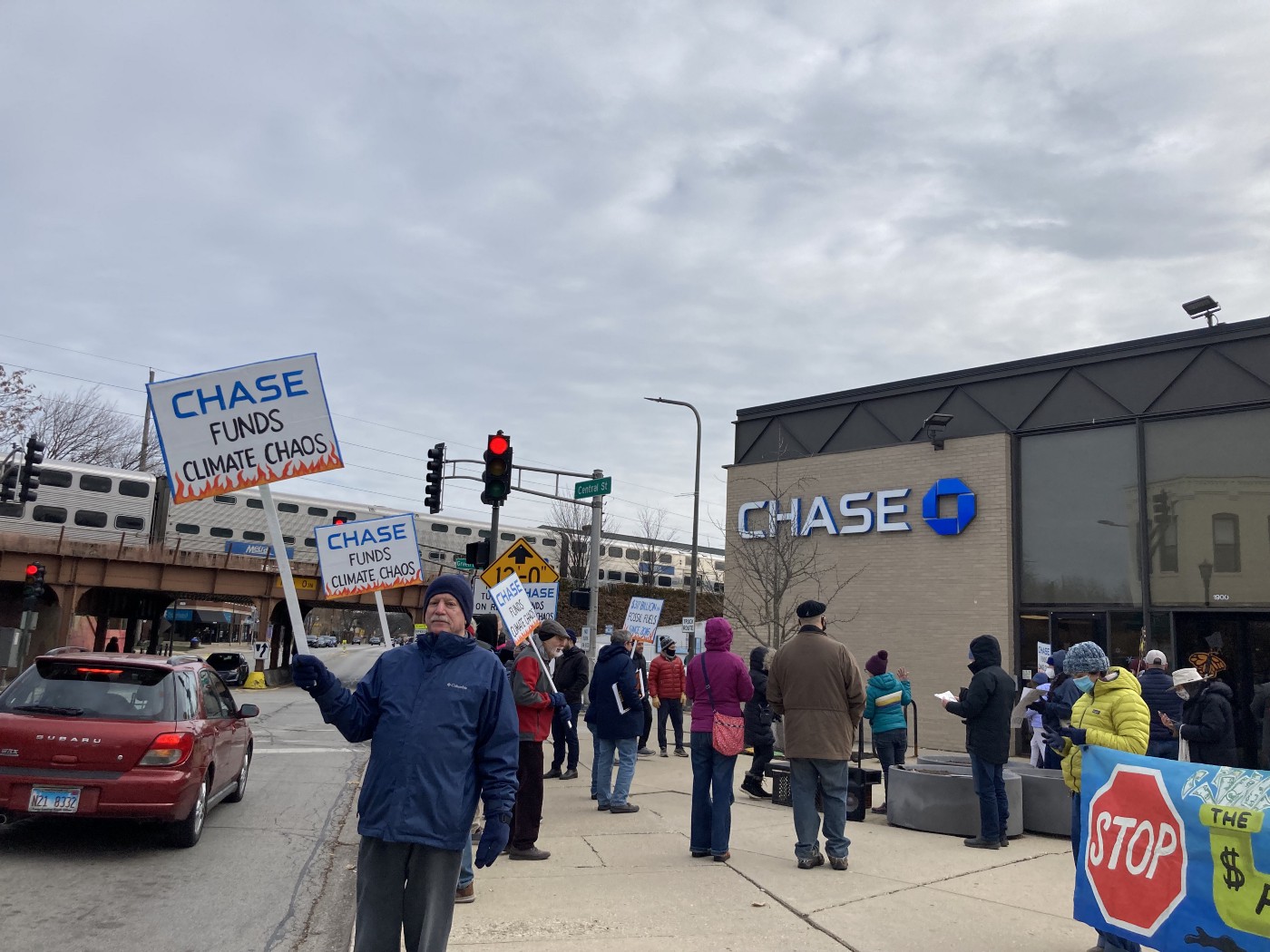 Black Friday event for Against Line 3 in front of the Evanston Chase bank on Nov 26. (Photo by Rubi Valentin)

Organizers from Chicago Against Line 3, which is a coalition of different environmental and social justice organizations working to defund the pipeline, have also been organizing educational events, direct action training, and fundraising events to provide supplies to frontliners in Camp Migizi and to fund protesters’ bail costs.

Many activists have been met with brutal state oppression. Over 1,000 arrests have been made during the construction of Line 3. Nationwide, 700 charges have been made against water protectors and activists, whether on the frontlines of Minnesota or outside of the Capitol building in DC. Additionally, over $150,000 has been spent on bail, and Enbridge has paid $2.9 million to Minnesota Law Enforcement to suppress opposition.

Simultaneously, climate activists have also begun fighting against another Enbridge project: Line 5, which is a pipeline that runs under the Straits of Mackinac and through Michigan’s Upper Peninsula. A rupture on this pipeline would contaminate 20 percent of the world’s fresh water. Due to the urgency of this issue, Chicago Against Line 3 has started to shift their actions and events toward decommissioning and raising awareness about Line 5 as an act of solidarity work.

“Something that water protectors on the front lines say is that we are all treaty people,” Chen said, “meaning that whether we’re indigenous or non indigenous if we’re living here in the United States, then it’s our duty to uphold the treaties that the US government has made with all indigenous people.”

There are countless ways to get involved and show support for stopping Line 3. One of the urgent calls to action today is to call for dropping the charges on water protectors, which can be done through signing the petition on Dropline3charges.com.

Other major calls to action include boycotting and protesting Chase and other banks that are funneling money into Line 3, such as CitiBank, Wells Fargo, Liberty Mutual, and Bank of America. According to Jessy Bradish, the most effective way to show resistance is to close an account and send a letter to the bank on why you are closing the account.

Another way to support the movement is by giving funds to frontliners directly. Camp Migizi in Minnesota is preparing for the wintering of their sites, so coats, propane, food, and other essentials would be necessary for their protection and survival. A compilation of petitions, direct actions, and funds to donate to can be found on Stopline3.org/take-action.