As colleges began to reopen after months of shutdowns and social restrictions, the University of Illinois at Chicago, UIC, reinvited students and staff back onto campus for the Fall 2021 semester.

Now in the growing era of contactless service, Starship autonomous delivery robots are being implemented on campuses, with hopes of future growth. These insulated two foot tall white robots deliver food and drinks from the restaurant to the customer, conveniently dropping off an order at any chosen location.

With customizable notifications, the Starship robots are marketed as a user-friendly alternative to leaving study hall for a snack.

Charles F. Farrell, the Executive Director for Business Development at UIC, and William Harvey, Resident District Manager at UIC Dining Services, an employee of Chartwells– Compass Group, worked together with Starship to bring these robots to Campus East for the 2021-2022 school year.

“I had been to a couple of conferences and Bill’s company has a relationship with Starship, and we started talking about, ‘should we think about this,’” said Farrell. “Then one thing led to another, just before the pandemic sort of broke out, if you will, in January of 2020, we flew down to the University of Houston, which is a school very, very similar to this one.”

After learning about the Starship network from the staff and students at the University of Houston, Farrell and Harvey decided that the delivery robots would be a great addition to UIC, as they would allow food to be delivered to students from dawn till dusk. 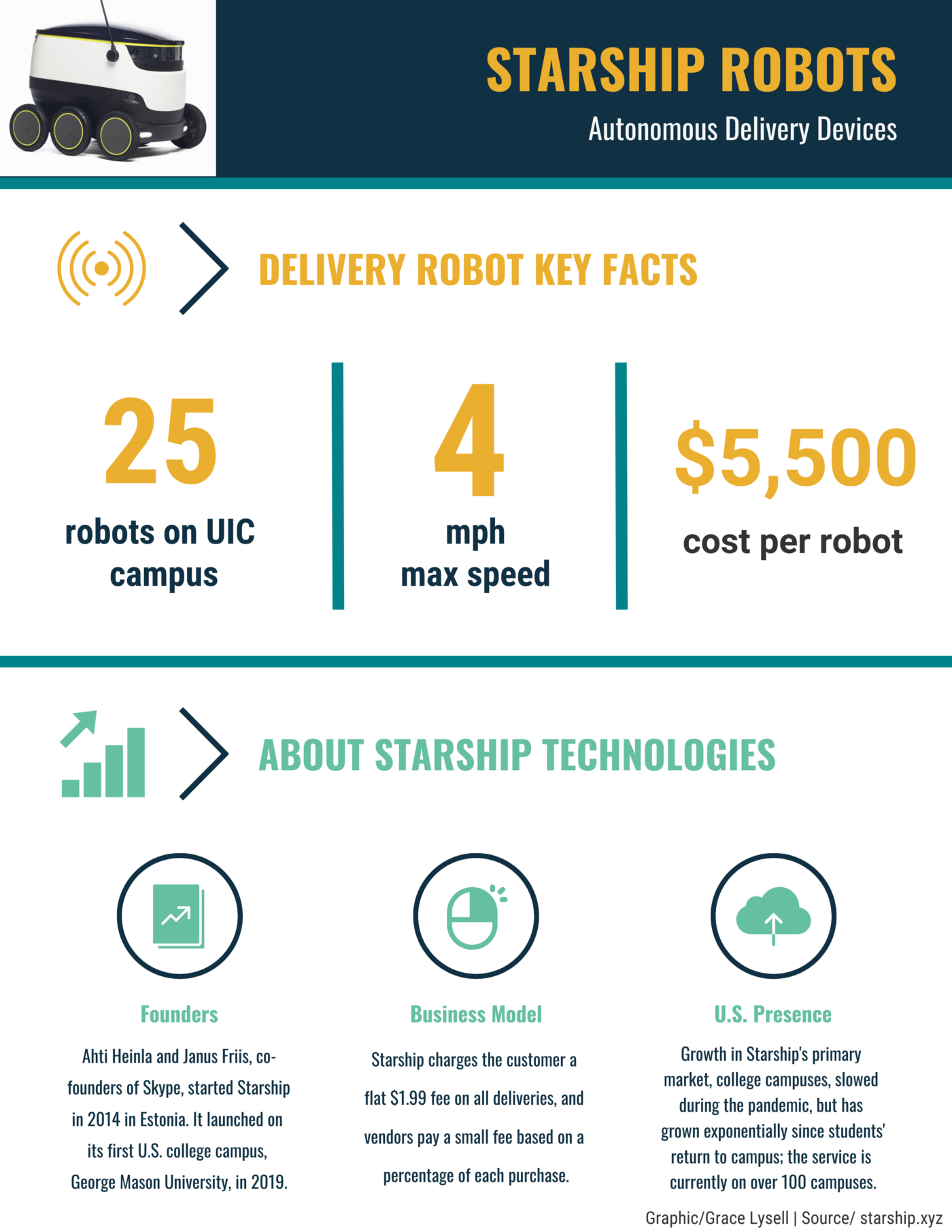 The next step was choosing when to bring the Starship to campus. The pandemic halted their implementation but, after the calamity settled, a contactless food delivery service fit the new social environment that emerged.

Karina Nevarez, manager at Dunkin UIC, witnessed the early implementation of Starship around Campus East during the 2021 Summer Semester.

“Around August, they would do little trials,” said Nevarez. “When school was starting, that’s when the process to use the robots really began. We figured out it’s just like filling any other order. We’re used to using stickers, so it’s the same thing. On the monitor the order sticker would pop up, then, since the order isn’t on the big screen, we know that someone has to take it downstairs to the robot.”

Most restaurants and markets have had great success adding Starship to their order fulfillment models.

Dunkin has had the easiest experience as they previously had a robust ordering system, but other smaller markets quickly learned how to adjust. The addition of the handheld notification devices that connect to the Starship App and robot activation are now standard at all participating locations on campus.

“It’s pretty easy when it’s slow,” said Nevarez. “But when we get rushes, like crazy rushes, then it gets hard, especially when we’re short-staffed. Then we lose a team member because someone has to take the order downstairs. So sometimes, it’s a good and a bad thing, but usually, so far, so good. We’ve never had any problems with the robot orders either, so that’s a good thing.”

Alaa Mohamed, a sophomore at UIC majoring in Biomedical Engineering, enjoyed the addition of Starship to Campus East, as it made receiving food effortless.

“It was so easy and simple,” said Mohamed. “I was able to get my coffee from Dunkin by ordering from the Starship app. I ordered the robot to meet me in front of the library. It was so convenient to have, I avoided wasting time walking in the cold to get my coffee.”

Personal safety on college campuses is highly stressed, especially for students with late classes or those spending late nights studying at the library. Starship not only provides a contactless delivery, but also adds another layer of security to the benefits the program provides.

“Pretty much all campus food and snack options are available, besides Chick-Fil-A, so I think that the choices are good,” said Mohamed. “Most places close early which is inconvenient for studying later in the evening, but Dunkin and the market in Student Center East are almost always available, which is nice.”

With the student body growing accustomed to Starship, an increase in the amount of orders is expected within the following semesters. Farrell and Harvey expect to expand the fleet available on Campus East in order to meet demands, as well as expand their range to include more food options.

As of December, UIC has not held any campus-wide surveys to gauge the popularity and use of the Starship network, but there is hope to expand to Campus South, West and beyond within the following years.

If Chicago chooses to define Starship as pedestrians, the robots will have full access to the city’s sidewalks and the ability to cross residential streets. This expansion of their territory would not only help serve students, by providing a larger list of restaurants to order from, but it would also expand the service to community members off campus.

With ambitions to expand across the city, Farrell and Harvey first must juggle the politics and complications of operating Starship autonomous robots within the heart of metropolitan Chicago, the nation’s third largest city.

“We want to take a real careful approach, we also don’t want to bite off no, pun intended, more than we can chew, and not have good service all across the board,” said Farrell. “So we want to figure it out, where we can control things first, and then think about branching out.”

Safety has been a concern for many cities hosting the Starship program. These autonomous robots have been using sidewalks and crossing intersections across the country, as most cities have classified Starship robots as pedestrians.

In order to ensure safety, Starship robots use sensors, computer vision, GPS and cameras which a human assistant can use to control the robot through difficult terrain.

Causing any damage to the robot could also be considered causing damage to private property. All drivers would need to inform the authorities immediately after the accident occured to clarify the situation.

If plans to expand UIC’s Starship autonomous delivery network succeed, the University will be gaining a portion of the profit from the services provided.

“Our relationship with Chartwells involves a commission based structure,” said Farrel. “So we get a percent, it’s a different percent on what kind of sale it is. So revenue from Starship, it’s just gonna get slid in with all the other things, like when you buy a sandwich from Chick-fil-A, a piece of that comes back to the university in the form of commission. The same thing will be true here.”

When ordering from Starship, there is a $1.99 delivery fee included with every order. This along with the standard charge of purchase will be distributed between all parties involved in the Starship network at UIC.

According to Starship, the autonomous robots have made over 2 million deliveries worldwide. In the United States, the service is spreading quickly to new college campuses, including the University of Kentucky, Purdue University, and most recently South Dakota State University.

Though the future of these robots is still uncertain, autonomous robots are forecasted to grow in popularity as they replace humans in menial jobs. As UIC plans to expand their fleet, sooner, rather than later, Starship robots might be seen delivering food across Chicago, as they learn how to better navigate urban sidewalks.

“Bill and I have joked that when we’re old, or in a nursing home, robots will take care of us,” said Farrell. “That might be a nice benefit, right, the robot can come to you. I think we’re a ways away from having bots on all the streets but, this is the beginning of it. We’re excited that we’re able to bring something that’s very new, and it’s not very many places to UIC.”