Home » Election » Pritzker Defeats Bailey for Another Term as Governor

Pritzker Defeats Bailey for Another Term as Governor 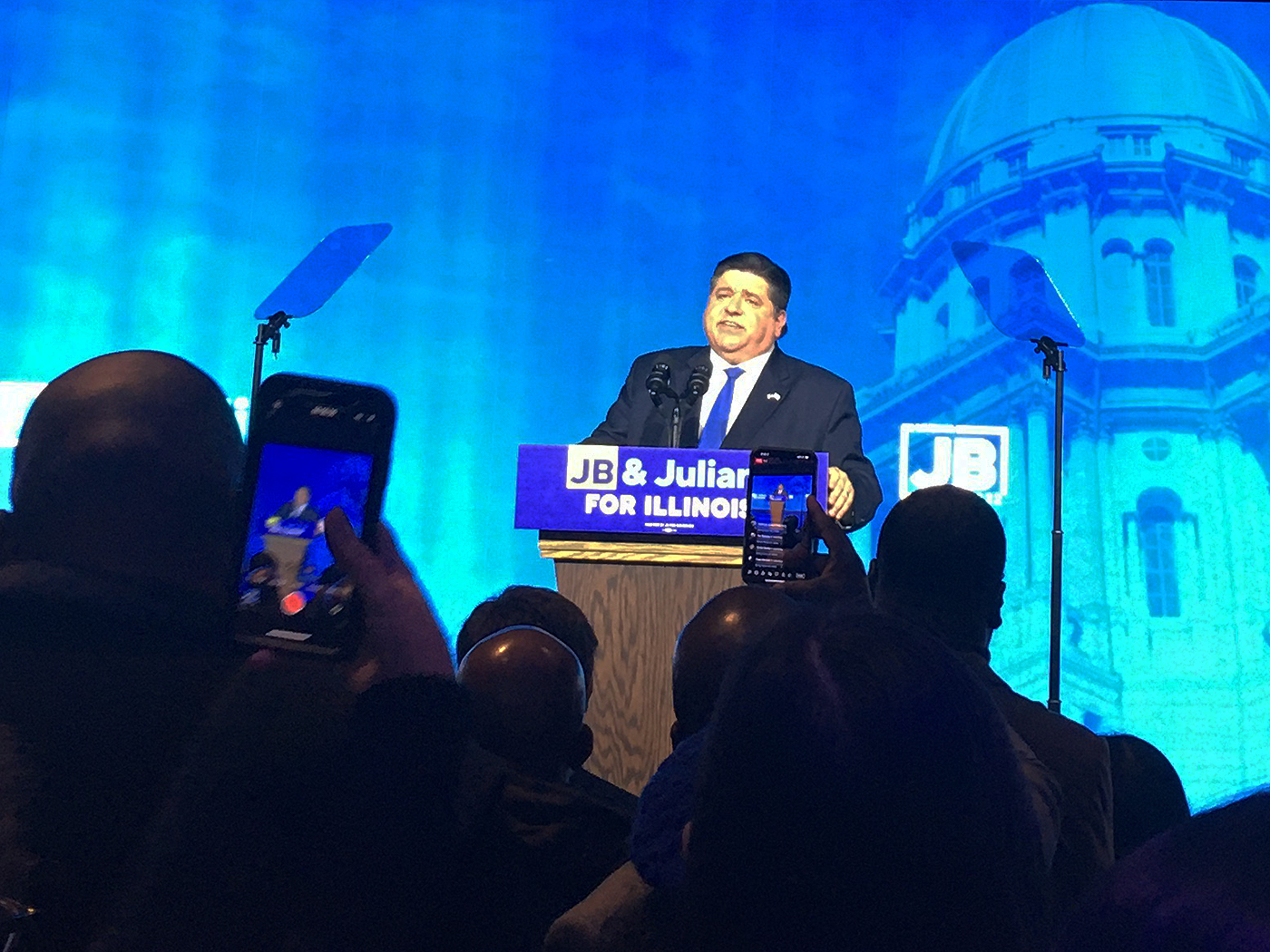 JB Pritzker hit Republicans hard on abortion during his victory speech: “Anyone who thinks that they can come into this state and try to force some right-wing MAGA war on a woman’s body, you will never get an inch of Illinois.” (Photo/Aristidas Tankus)

The Illinois governor race on Tuesday night ended almost before it began. Nine minutes after the polls closed at 7 p.m., The Associated Press called the race for Democratic incumbent JB Pritzker, while the votes were still being counted.

On an early night, the billionaire Pritzker held easily defeated farmer and Republican candidate Darren Bailey, 56, of Louisville, Illinois, for another term at the governor’s office. Pritzker earned 55.3% of the vote, while Bailey had 41.6% of the vote. Libertarian candidate and diesel technician Scott Mitchell Schluter, 35, of Marion, finished the race with only 3.1% of the vote.

At Marriott Marquis Chicago, the crowd of Pritzker’s supporters cheered as the governor went to the podium to deliver his victory speech.

“Thank you for placing your trust in me to carry out this mission for four more years,” Pritzker said. “I won’t let you down.”

In his victory speech, Pritzker wanted his supporters to work with him optimistically and not stave off on Democratic views on jobs, health care, and women’s rights. Furthermore, he received the biggest cheer from the crowd of supporters when talking about abortion.

“Let me be even clearer,” Pritzker said. “Anyone who thinks that they can come into this state and try to force some right-wing MAGA war on a woman’s body, you will never get an inch of Illinois.”

Big Lead in the Polls

Leading up to election day, Pritzker held a commanding double-digit lead in several polls. As of Oct. 17, 2022, Pritzker held a significant lead in the polls over Bailey by 22%. The week before, Pritzker had a 15% lead in the polls. Bailey’s campaign contradicted the poll results by stating the race was much closer. Bailey’s campaign would be accurate in their claim because of a more recent poll, in which Pritzker only held a single digit lead over Bailey. However, Pritzker’s single-digit lead widened to double digits on Nov. 8.

Pritzker is an advocate for the controversial SAFE-T Act, which makes reforms to the criminal justice system. He is also an advocate for abortion rights and eliminating parental notification for minors to protect teenagers.

On June 28, Pritzker won the Democratic primary with 92.8% of the vote against former U.S. Army officer Beverly Miles, 55, also of Chicago, who finished with 7.2%.

During his previous four years as Illinois governor, Pritzker had many successes.

Pritzker won bipartisan passage for Rebuild Illinois, an investment to upgrade roads, bridges, rail, data transition, and education in the state. As a solution to years of fiscal mismanagement in Illinois, he proposed and passed an annual balanced budget, eliminated the multi-billion dollar backlog, reduced pension liabilities, and achieved six credit upgrades from rating agencies.

During the COVID-19 pandemic, Pritzker prioritized health and safety measures by supporting families and businesses during the recession.

On Sep. 14, 2021, he proposed and signed a comprehensive clean energy bill to phase out fossil fuels, leading Illinois to become national leader in a battle against climate change.

Finally, on April 18, 2022, he signed a $1.8 billion tax relief plan that suspended a gas tax increase and state tax on groceries. The tax relief plan went into effect on July 1, 2022, a few days after Pritzker won the Democratic primary.

Apart from his successes, Pritzker also experienced some failures during his previous four years in Springfield.

Pritzker shut down wide swaths of Illinois’ economy during the pandemic, drawing heat from small-business owners, particularly downstate. As a result, the Illinois Department of Employment Security could not handle a vast amount of unemployment claims. It took Pritzker’s administration several months to stabilize the issue, and lawmakers were critical of the response based on the amount of phone calls and emails received from constituents. In addition, the Illinois Department of Employment Security, apart from the legitimate claims, was also full of fraudulent claims and had to pay nearly $2 billion to people who did not qualify for unemployment benefits.

A state-run veterans’ home in LaSalle, Ill. saw 36 residents dead from COVID-19 in the fall of 2020. Thus, Pritzker fired the home’s director; however, an audit claimed that the Illinois Department of Public Health failed to identify and respond to the seriousness of the outbreak. One month after the outbreak, Linda Chapa LaVia, his Department of Veterans Affairs director, resigned.

Finally, in 2020, Pritzker’s plans to stabilize Illinois’ shaky finances by ditching the income tax and replacing it with a graduated rate structure were rejected by Republicans and wealthy residents.