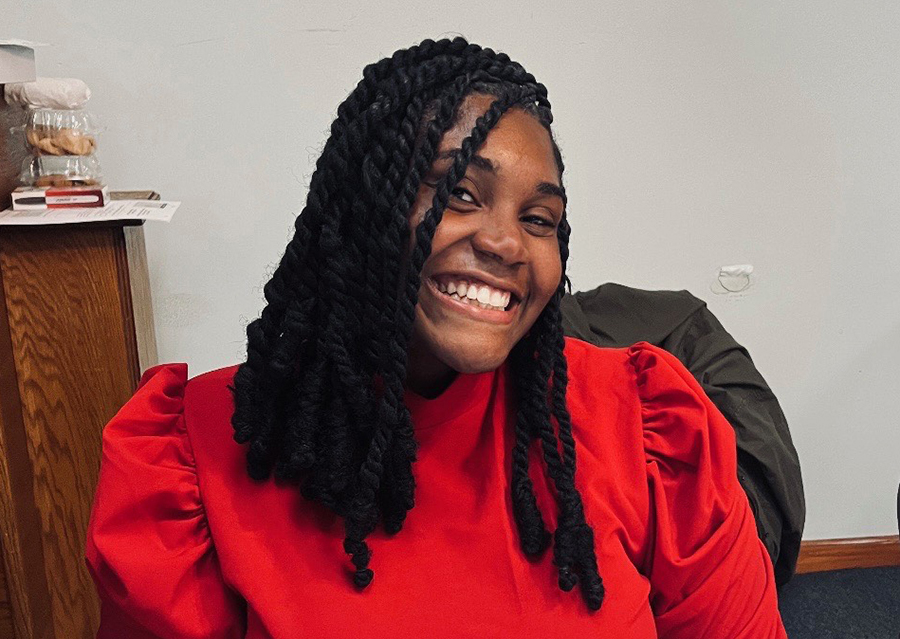 Jamyirah Scott was one of hundreds of Illinois high school students who volunteered to work at the polls on election day. (Photo courtesy MIKVA)

Instead of sleeping in and enjoying the day off of school on Nov. 8 like most of her Lindblom Math and Science Academy classmates, Jamyirah Scott was up bright and early to work the polls on Election Day as a student election judge.

Thanks to the designation of Election Day as a legal school holiday by Illinois State Senate Bill 825 (SB 825), students at public schools and universities across the state had the day off as many of their schools serving as polling places. Some students, like Scott, served as election judges, despite most of them not yet being old enough to vote.

Working the polls is by no means a small commitment. Prior to election day, election judges and polling place technicians must complete their respective in-person and online training courses in order to be eligible to receive full compensation. Then a day or two before election day they must set up their polling place and ensure all the equipment is working properly.

On Election Day, poll workers arrive at their polling places at 5 a.m. to have the polls ready to open at 6 a.m. After the polls close at 7  p.m., poll workers must transmit the results to the clerk’s office and pack up all the equipment; a process that normally takes an additional hour, hour and a half to complete.

Scott, who worked both the June 28 primary election and the Nov. 8 gubernatorial election, reported being the only teen working at her assigned precinct.

“I was the only student judge there, there was nobody else that was my age,” Scott said. “They were all old heads. That’s what I call them.”

Data show the majority of US poll workers are older, many retired. The biennial Election Administration and Voting Survey (EAVS), administered by the US Election Assistance Commission (EAC), reported that of the 36 states that record and report poll worker ages to the EAC that a majority of poll workers in 2016, 2018, and 2020 elections were over the age of 41.

In 2016 and 2018, the 61-70 age group made up the biggest percentage of poll workers, with 32% and 31% respectively. However, the EAVS saw a shift in 2020 with the distribution shifting slightly younger. One reason: during the pandemic older, more at-risk election judges stepped back and younger election judges stepped up to take their place.

Additionally, recruitment was reported as being slightly easier, with 52% percent of jurisdictions nationally reporting that it was very difficult or somewhat difficult to staff polling places, compared to 64% in 2016.

However, poll worker recruitment is still a challenge for many individual jurisdictions. According to Frank Herrera, the Director of Communications for the Cook County Clerk’s Office, which oversees the administration of elections in Suburban Cook County (Chicago elections are overseen by the Chicago Board of Election Commissioners), there was a 40% decrease in the number of election judges over the last eight years.

Ideally, the Cook County Clerk's office tries to recruit 7,150 poll workers for an election, to staff each of the 1,430 precincts in their jurisdiction with four judges and one polling technician.

For the June primary, Herrera reported that they had roughly 5,000 poll workers, including 300 student election judges.

“Luckily, with the help of students and our veterans, we bolstered our ranks to over 6,000 judges for the gubernatorial election,” Herrera said. “Recruiting over 2,000 in the month leading up to Election Day.”

To recruit this new class of judges, the Cook County Clerk’s Elections Staff, according to Herrera, has visited high schools and community colleges and used targeted ads on Facebook and Instagram geared toward voters under 30. They also sent flyers to community college administrators and college newspapers and radio outlets.

Additionally, they are working on developing partnerships with local community colleges to allow students to earn credit for working the polls to further incentivize students.

Organizations like the Mikva Challenge, based in Chicago, have also been instrumental in recruiting students to serve as election judges. The organization focuses on getting youth involved in the issues that affect them and elevating their voices to create a more inclusive democracy by working with schools to incorporate their Action Civics curricula into their classrooms. Part of that includes working with teachers to encourage their students to become election judges, allowing them to get involved with elections before many of them are eligible to vote.

“Our student judge program is part of (our teacher-facing work) because the way we recruit students mostly is by working with teachers at high schools,” said Leah Brown Schneck, the Elections in Action Manager at the Mikva Challenge. “So we have Rockstar teachers throughout the city that recruit their students to serve as election judges, and help us get all the paperwork in and make sure that students are prepared for what the long day is going to look like.”

Scott is not only a part of Mikva’s student election judge program but is also on Mikva’s Safety and Justice Council. She recalled learning about the opportunity to be an election judge from her softball coach and seeing Mikva Challenge flyers around school. Her mom even forwarded her an email she got and encouraged her to apply.

As an alum of the Mikva Challenge, Brown Schneck also served as a student election judge several times in addition to being involved with other Mikva programming.

“Our students really fill critical gaps in staffing in terms of being able to utilize the electronic poll book and election voting technology and being able to serve as translator judges especially here in Chicago, where we have so many voters who are not English speakers,” said Brown Schneck, “And it gives students such an amazing firsthand look at how democracy works.”

According to Brown Schneck, 98% of the Mikva students in the student election judge program intend to vote when eligible, 96% intend to serve again as an election judge and 94% intend to convince their friends and family of the importance of voting.

Additionally, research by the Center for Information and Research on Civic Learning & Engagement (CIRCLE) at Tufts University’s Tisch College of Civic Life supports the assertion that student election judge programs encourage students to vote in the future. In their study of the student election judge program in Minneapolis throughout 2020 and 2021, CIRCLE found that youth voter turnout was highest in precincts with more student election judges, and that of students surveyed 97% said it improved their understanding of the voting process, and 67% felt they were making things better for their communities.

Scott, a junior, speaks with passion in her voice about issues like abortion and cash bonds, and how she wants to be heard. The wall behind her features abortion rights posters among her pictures of family and friends. When asked about her plan for the future, Scott said she is thinking about potentially going into campaign management, marketing, pediatric medicine, or business.

“When I first started being an Election Judge, I just wanted the money,” Scott said. “And then once I really like realized I'm learning something, (it’s) not just about wanting to have money. It's about also how I want to be a citizen of the United States and how my voice can be impactful.” 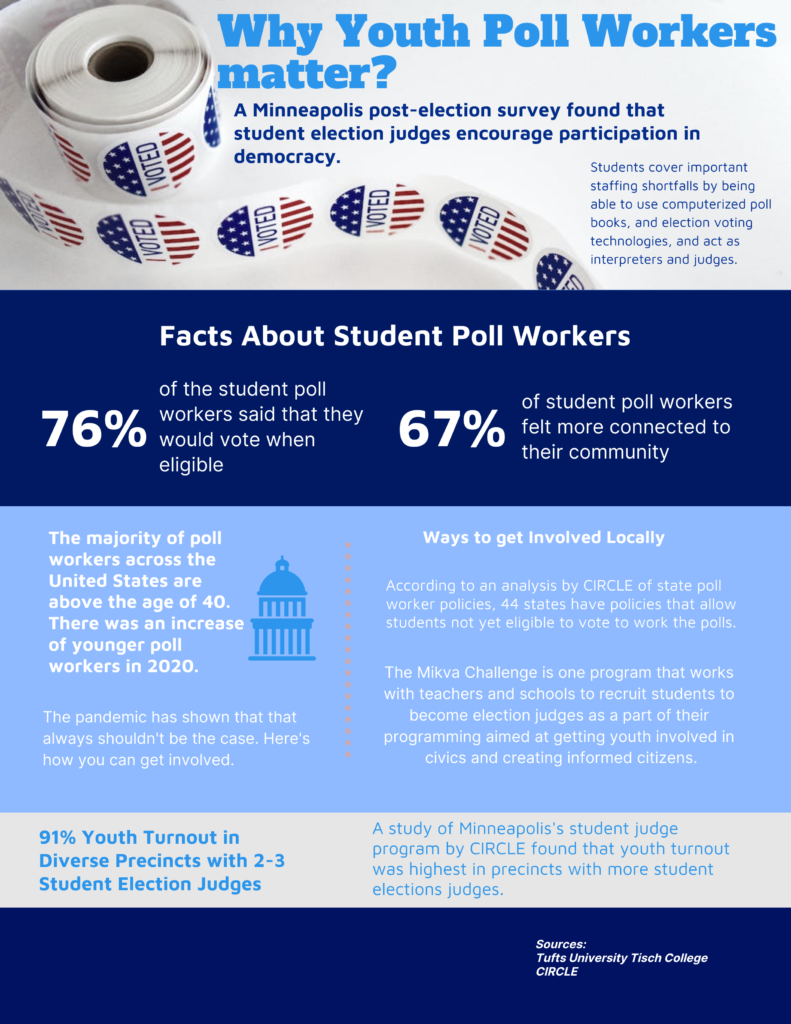